The sky in August and September

In the north the sixth brightest star in the night sky, Capella, is climbing away from the horizon, although from the south of England it never sets. A little north of it lies a pair of open clusters, NGC 1528 and NGC 1545 of magnitudes 6.4 and 6.2 respectively, that actually belong to neighbouring Perseus. North of Capella we find the small and faint group of stars that constitute Camelopardalis and contain the mag 5.7 open cluster NGC 1502, into which Kemble’s Cascade seems to flow. Both Cepheus and Cassiopeia lie to the east of the meridian whilst to the west we find the two bears and Draco the dragon.

Draco has a number of faint galaxies within its borders, plus the mag 8.8 planetary nebula (NGC 6543) known as the ‘Cat’s Eye’. It has a central star of brightness 9.5 that can be easily seen with a moderate sized telescope. It was first observed by William Herschel in 1786 and later investigated spectroscopically by William Huggins in an attempt to prove such objects were gaseous. Now is a good time to look for the Cat’s Eye as its altitude is just under 70°.

Looking east we find that Pegasus and Andromeda are now prominent with the great spiral already at an altitude of 40°. Below the winged horse, Pisces has just cleared the horizon bringing Uranus with it, and a little to the west is Aquarius with Neptune within its borders. Just beyond the horse’s outstretched neck is the globular cluster M15, at magnitude 6.4. Its age has been estimated at around 12 billion years, making it one of the oldest globulars known. It is a conglomeration of some 100,000 stars, many of which are densely packed towards the centre, and is only one of a handful of globulars known to contain a planetary nebula. Just west of Pegasus is the small constellation of Equuleus within which at this time can be found the magnitude 9.3 asteroid (2) Pallas. 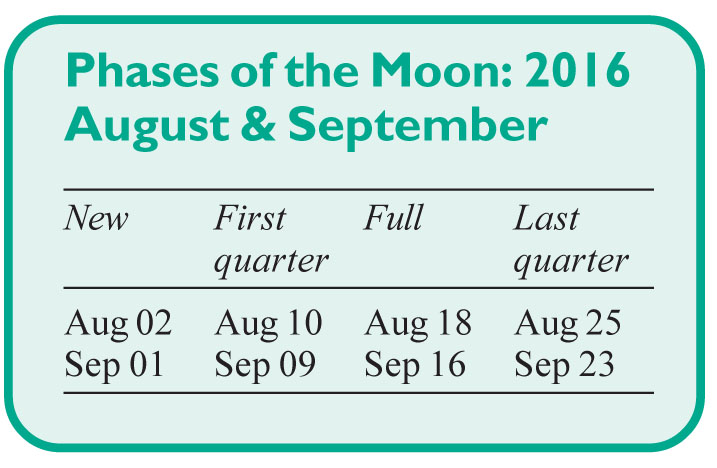 The Summer Triangle sits astride the meridian, due south with Deneb just 10° from the zenith. In fact the overhead point lies within the boundary of the Swan at this moment in time. Two small groups, Sagitta and Vulpecula, lie within the Summer Triangle, the latter of which contains Collinder 399, alternatively known as Brocchi’s Cluster, or more appropriately the Coathanger Asterism. The Milky Way rises from the southern horizon, where the rich star fields of Sagittarius can be found, and passes through Scutum, Aquila and along the spine of the celestial Swan providing excellent views of our own galaxy with the Sun now well and truly out of the way.

Towards the west Arcturus in Boötes is still 20° in altitude, providing one of the pointers to the rather faint constellation of Hercules. The other pointer is Alphekka, the brightest star in Corona Borealis. A line drawn through the two and continued northwards will reach the quadrilateral of stars in the strong man known as the ‘Keystone’. Currently the head of the dragon lies almost due west and points in the general direction of Hercules.

Mercury reaches greatest eastern elongation (27°) on August 16, although this will be a very poor apparition for observers in the UK. On that night Mercury will already have set by the time the Sun is 6° below the horizon at the end of civil twilight. Following elongation Mercury moves back into the clutches of the Sun to suffer an inferior conjunction on September 12. It then becomes a morning object reaching greatest western elongation (18°) on Sept 28, though it will not reach maximum brilliance until shortly afterwards. This apparition is far more favourable despite Mercury’s elongation being considerably smaller. The planet will be seen 10° above the eastern horizon with the Sun 6° below it on that date.

Venus was in conjunction with the Sun in early June and is now moving slowly east of it to become an evening object. It should become visible from the latitudes of the UK from mid- to late August low in the west in twilight. By the end of September it will be a magnitude -3.9 object 7° high at sunset, towards the south west. The planet will put on an excellent show, particularly in the first part of 2017.

Mars is still an evening object, and will continue to be so for some time thanks to its brisk eastward motion, although its altitude is disappointingly low. The red planet begins the period within the confines of Libra but the following day crosses into Scorpius, and by Aug 21 has reached Ophiuchus where it resides for just a few days before entering Scorpius once more. A week later it leaves Scorpius to re-enter Ophiuchus on Sept 2, where its swift progress sees it cross the border into Sagittarius on Sept 22. Despite this rapid movement the planet has set by 23:00 BST at the end of August and by 22:00 at the end of September. During these months its brightness has slipped from -0.8 to +0.0 and its apparent diameter from 13.1 to 8.8 arcseconds.

The synodic period of Mars is on average 780 days, which means the next opposition will occur in 2018 July, when the planet will be at declination 25°, achieving an altitude of merely 13° when seen from southern England.

Jupiter is still an evening object at the start of the period although its window of visibility is drawing rapidly to a close. Initially it resides in Leo but its direct motion carries it across the border into Virgo on Aug 9. On Aug 1 the gas giant is 7° high in the west with the Sun 6° below the horizon. Then on Aug 27 Jupiter is just one tenth of a degree south of a much brighter Venus when they are both 22° east of the Sun. Despite moving eastwards the Sun soon catches Jupiter and the two are in conjunction on September 26. It should become visible in the dawn twilight in mid-October.

Saturn is on the meridian in the constellation of Ophiuchus at sunset as the period begins. It continues to move retrograde and approaches Scorpius although it reaches its second stationary point on Aug 13 before it can cross the border. It will remain within the confines of the serpent bearer until 2017 February. As would be expected three months after opposition, the brightness of the planet decreases a little from +0.3 to +0.5 and its apparent diameter drops from 17.6 to 16 arcseconds. As the period begins the ringed planet sets at 01:00 BST but by the end this has slipped to 21:00 which is only 2½ hours after sunset.

Uranus is still in Pisces, where it remains until 2018 April, rising at 23:00 at the beginning of August. It will reach opposition in mid-October with a magnitude of +5.7.

Neptune lies in the constellation of Aquarius and reaches opposition on September 2. At that time it will be magnitude +7.8 with an angular diameter of 2.4 arcseconds, at an altitude of 30° when it culminates due south.

Pluto was at opposition in Sagittarius in early July. On August 1 it culminates at 23:30 at an altitude of 17°, with the bonus that the Sun is 18° below the horizon providing true darkness, at least in the south of the UK. By September 1 the planet crosses the meridian two hours earlier, when there is still astronomical twilight at that time.

(1) Ceres at mag 8.8 lies within Cetus and rises a little after midnight as the period begins. By the end of September it has brightened to mag 7.7 and rises at 20:30 to remain visible throughout the hours of darkness. It will reach opposition on October 21.

The Perseids are this year affected to a degree by the presence of the Moon although on the night of maximum (August 12/13) our nearest neighbour will have departed the scene by 01:00. The time of enhanced activity is predicted for midday on August 12 so watches on the nights either side are likely to see moderate rates, although observations at any time during the shower’s normal limits are worthwhile and should be communicated to the Director of the Meteor Section. Details of how to record your observations along with tips and advice can be found on the BAA website by going to the ‘Sections’ page and selecting ‘Meteor’.

In the table below I’ve listed events for stars of mag 7.0 or brighter although there are many others that are either of fainter stars or those whose observation may be marginal due to elevation or other factors. DD= disappearance at the dark limb, whilst RD= reappearance at the dark limb. The column headed ‘mm’ indicates the minimum aperture required for the event. Times are for Greenwich and in BST.

There are three events during the months in question, all in the early hours of the morning. Observers are encouraged to attempt these events and submit results, negative as well as positive, to Tim Haymes at occultation@baalunar section.org.uk. More details are available in the current BAA Handbook. 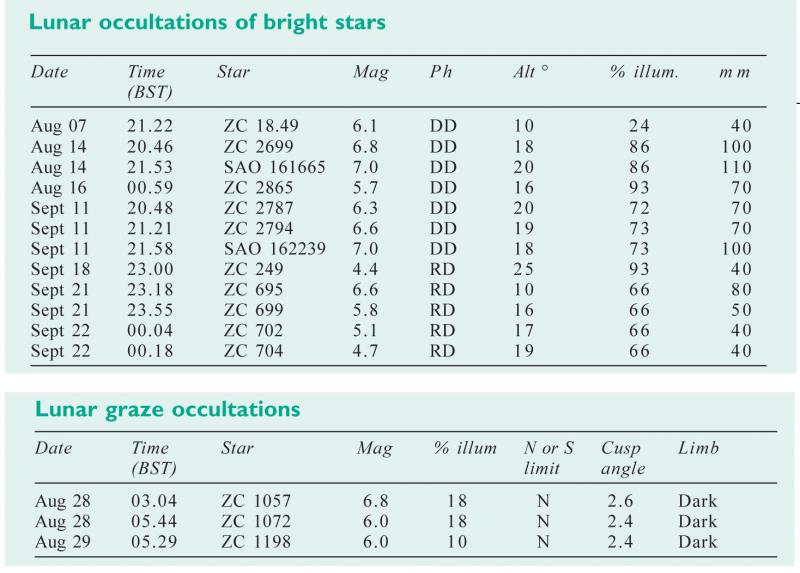