In the north Ursa Major lies close to the zenith, although this point actually falls just outside its borders in neighbouring Canes Venatici. The Great Bear points generally toward Gemini and Auriga, but between them lies the faint and rather poorly defined shape of Lynx. This essentially appears as a rather irregular line of stars, the brightest of which is magnitude +3.1. It does however contain the globular cluster NGC 2419, known as the ‘Intergalactic Wanderer’, that appears to be on a highly elliptical path around the galaxy.

Familiar Cassiopeia, with its smattering of open clusters, lies on the meridian twenty degrees above the horizon as seen from southern England. Also in Cassiopeia are the Heart and Soul Nebulae, IC 1805 and IC 1848 respectively, both of which have a visual magnitude of 6.5.

Turning our attention to the east we find that two of the members of the Summer Triangle, Vega and Deneb, are becoming prominent whilst the third still lies below the horizon. Other summer groups also in evidence are Boötes, Corona Borealis and Hercules. The latter is best found using the other two by drawing a line from Arcturus, through the bright Alphekka which brings you to the so called ‘Keystone’ which forms one of the quadrilaterals that make up the strong man’s body. The position of these groups means that there is now a selection of globular clusters available for observers whose interests lie in that direction. M3, M5, M13 and M92 are probably the best known of their type.

Towards the south, Virgo is on the meridian whilst above her lie Coma Berenices, which contains the globular M53, and Canes Venatici. Below Virgo is the tail of Hydra, and riding on the back of the water snake are Crater, the cup and Corvus, the crow. Hydra, Crater and Corvus all belonged to the second century astronomer Ptolemy’s original list of 48 constellations.

In the west, Orion has disappeared although some of his retinue are still visible. The celestial twins are more than 30° in altitude whilst Capella is just a little lower. M44, the open cluster in Cancer is still at a healthy altitude and is a pleasing sight seen against a pollution-free sky. It is thought to share a common origin with the Hyades cluster in Taurus.

Mercury went through superior conjunction on March 23 but is now moving swiftly east of the Sun to become an evening object. This will be the smallest planet’s best evening apparition for 2016 although at greatest elongation, which occurs on April 18, it is, in angular terms, only 20° from the Sun. It is also fortunately some 20° north of the celestial equator which should make identification in the twilight easier. On the evening of elongation, with the Sun 6° below the horizon, Mercury, at magnitude +0.0, is 12° high in the west-north-west. The planet then draws back towards the Sun and reaches inferior conjunction on May 9 after which it returns to the morning skies. A transit of Mercury occurs at inferior conjunction and is visible in its entirety from the UK. First contact occurs at 12:12 BST with the transit concluding at 19:40 BST. Full details can be found in the BAA Handbook. 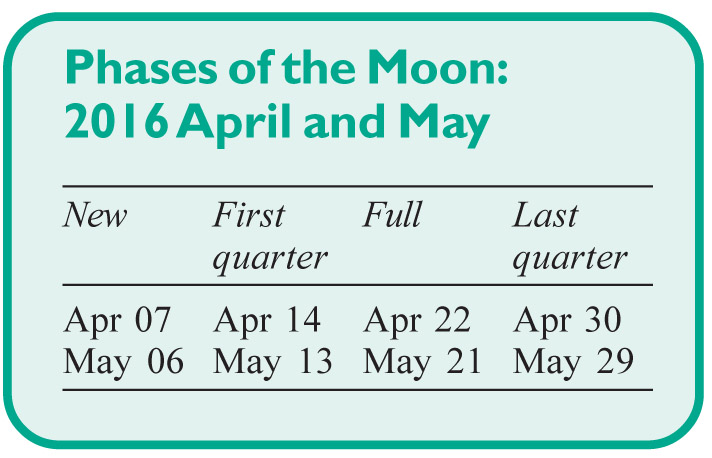 Venus is poorly placed for observation for the whole of the period. At the beginning of May it rises just a few minutes ahead of the Sun after which it draws closer in preparation for superior conjunction in early June. From the UK it will be middle to late August before we see brilliant Venus in our evening skies once again.

Mars rises a little after midnight (BST) at the beginning of April but by the end of May it has risen before sunset. The red planet begins the period in Scorpius but quickly moves into neighbouring Ophiuchus, although it reaches its first stationary point on April 17 after which it quickly returns to the confines of the Scorpion. Mars continues to grow in both brightness and apparent size as it approaches opposition which occurs on May 22. At opposition it shines at magnitude -2.1 with an angular size of 18.3 arcseconds, though sadly with a declination of -20° its altitude at culmination is a disappointing 17.5°.

Jupiter continues to dominate the evening skies during April and May. It was at opposition in early March and so begins this period with visibility throughout the hours of darkness. Even at the end of May it is still above the horizon at 02:00 BST. The giant planet remains within the confines of Leo moving retrograde until May 9 when it reaches its second stationary point. Following that it resumes direct (west to east) motion once more. Jupiter’s brightness slips from -2.5 to -2.1 and its angular size falls from 44 to 38 arcseconds.

Saturn is in the constellation of Ophiuchus throughout the period, moving retrograde the whole time. At the beginning of April it rises at 01:00 BST, though by the end of May it rises four hours earlier in preparation for opposition which will occur on June 3. The ringed planet brightens slightly to +0.1 and grows in apparent size to 17 arcseconds. The north pole of Saturn remains tilted towards the Earth at a little over 26°.

Uranus is in conjunction with the Sun on April 9, after which it moves west of the Sun to become a morning object in Pisces. By the end of May it rises at 03:00 BST which is a little less than two hours before the Sun.

Neptune, in Aquarius, rises at 06:00 at the start of the period, though by the end it becomes visible at 02:00, some three hours before sunrise.

(1) Ceres and (4) Vesta. Ceres is technically a morning object in Aquarius but is too close to the Sun for observation. By the end of May it has moved eastwards into neighbouring Cetus but is still poorly placed, rising an hour ahead of the Sun. Vesta is initially an evening object in Aries although it is swiftly swallowed up by twilight, reaching solar conjunction on May 23.

This year the April Lyrids are one of the showers that suffers at the hands of moonlight. The shower’s normal limits are from April 18 to 25 with maximum expected at 23:00 BST on April 21. A ZHR of 10 is predicted though this will be severely curtailed by a full Moon in Virgo.

In the table I’ve listed events for stars of magnitude 7.0 or brighter although there are many others that are either of fainter stars or those whose observation may be marginal due to elevation or other factors. DD = disappearance at the dark limb, whilst RD = reappearance at the dark limb. There is a column headed ‘mm’ to indicate the minimum aperture required for the event. Times are for Greenwich and in BST.

Several graze occultations occur during the period in question, some of which may be very challenging. Times given are in BST. Observers are encouraged to attempt these events and submit results, negative as well as positive, to Tim Haymes at occultation@baalunarsection.org.uk. More details are available in the current BAA Handbook. 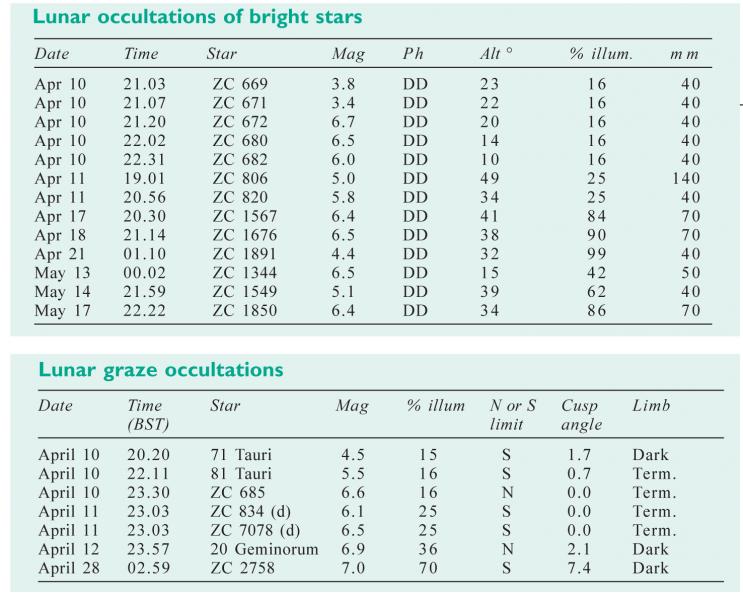 On the morning of April 6, the Moon passes briefly in front of the planet Venus. The details are for Greenwich and times in BST.