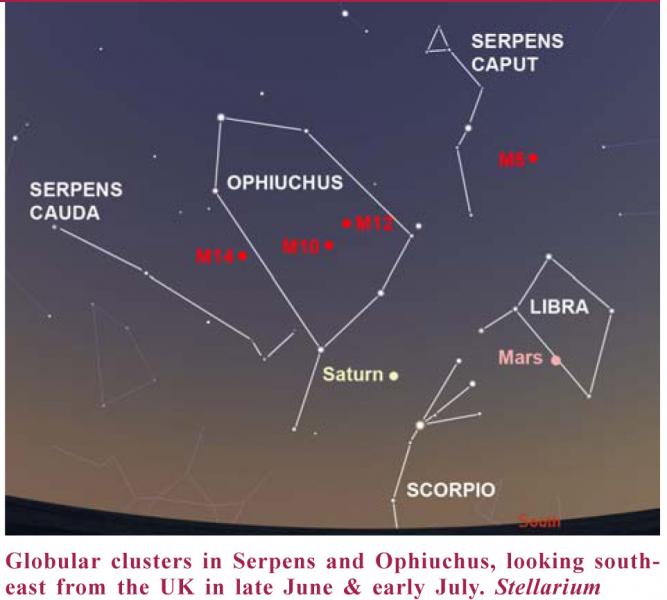 In the north Ursa Minor points upwards towards the zenith which currently lies on the Draco/Hercules borders. The Little Bear’s larger relation is to the west of the meridian and pointing toward the bright star Capella, in Auriga, which is just 10° above the horizon. To the east of the meridian we find Cassiopeia and Cepheus, the latter of which has a number of moderately bright open clusters within its boundaries. NGC 7510, NGC 7160 and NGC 7380 are the most obvious although there are others of which NGC 188, discovered by John Herschel, is thought to be around five billion years old. Perseus is skirting the horizon although the famous double cluster lies at an altitude of 20°.

Looking east, all three members of the Summer Triangle have risen along with a straggling group of small and faint constellations that stretch between Cygnus and Aquila. Equuleus is closest to the horizon and not far from the head of the mythological winged horse. Then as we climb we pass through Delphinus, Sagitta and Vulpecula, the latter of which seems to have more than its share of interesting objects given its diminutive size. It contains a number of open clusters, the brightest being NGC 6940 at magnitude 6.3. It is also home to the planetary nebula M27, otherwise known as the Dumbbell.

Towards the south the faint summer groups hold sway, save for the head of the Scorpion that tantalises those of us viewing from the latitudes of the UK. Closer to the zenith Boötes and Hercules are either side of the meridian whilst between them lies Corona Borealis. It contains the recurrent nova TCrB which last suffered a major outburst in 1946 and which is reported to be currently brightening beyond normal limits. Could its next outburst be imminent? 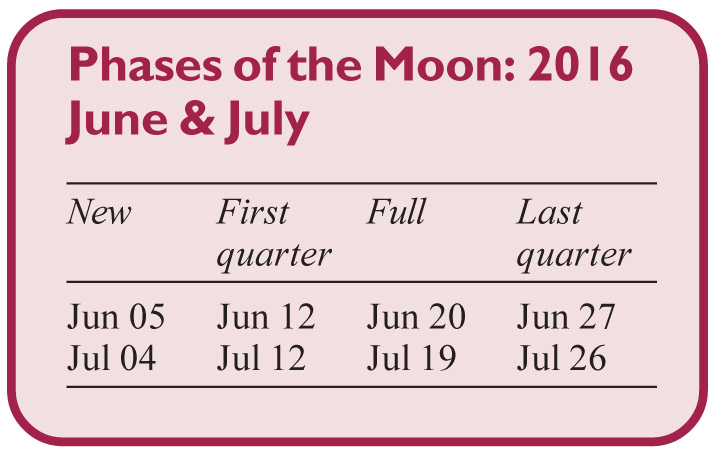 Immediately below Corona we find the dismembered head of the sea serpent, Serpens Caput. Moving eastwards we come first to the large and faint constellation of Ophiuchus, and then to the tail section of the unfortunate serpent. There are a few open clusters in the area including IC 4756 (known as Graff’s cluster) at mag 5.4 and NGC 6633 at mag 4.6. The region also contains a large number of globular clusters, of which M5, M10, M12 and M14 are the most obvious. The galactic centre lies close by in neighbouring Sagittarius, which itself is just coming into view.

In the west Cancer is setting with Leo, that still harbours Jupiter, not far behind. The position of the ecliptic at this time of year means that none of the zodiacal groups are seen at their best. Virgo, the second largest constellation in the entire sky, is one such group that suffers in this way despite its considerable bounty of galaxies.

Mercury is a morning object reaching greatest western elongation of 24° on June 5. Sadly, it cannot be seen from the UK because it rises just forty minutes ahead of the Sun and is lost in the twilight. The smallest planet then moves back towards the Sun and suffers a superior conjunction on July 7 after which it becomes an evening object. That also will be a poor apparition for the UK with Mercury being just 1° above the horizon at the end of civil twilight on the last day of the month.

Venus is too close to the Sun for observation, passing through superior conjunction on June 5. It will not become visible again from these latitudes until mid to late August. From the tropics it should be seen low in the west after sunset around mid to late July.

Mars was at opposition at the end of May and is therefore visible throughout the hours of darkness as the period begins. By the start of July it culminates at 21:40 just twenty minutes after sunset. By the end of the month it sets at midnight (BST) so its period of visibility is comparatively short. The red planet has been travelling retrograde since April but reaches its second stationary point in Libra on June 30, after which it resumes its direct (easterly) motion. The planet’s brightness drops noticeably from -2.0 (June 1) to -0.8 (July 31) as its apparent size falls from 18.6 to 13.1 arcseconds during the same period.

Jupiter is a brilliant object in the southwest as darkness falls at the beginning of June. However, by the end of July it sets just 1½ hours after the Sun. As you would expect its brilliance and size both decrease as the distance between the gas giant and the Earth increases. During the period in question its magnitude drops from -2.1 to -1.7. Jupiter is currently moving direct in Leo, having reached its second stationary point in early May.

Saturn reaches opposition on June 5 in the constellation Ophiuchus which must be a terrible nuisance for astrologers everywhere. The ringed planet continues to move retrograde throughout the months in question and approaches the border with Scorpio, although it never actually crosses into the scorpion’s territory. From southern England it culminates at an altitude of just 18° on the night of opposition, something that gets marginally worse over the next two years. The planet’s brightness remains moderately static, peaking at 0.0 when its equatorial diameter rises to 18.4 arcseconds. Saturn’s largest moon Titan is best seen to its east on June 10 & 26 and July 12 & 28. It is west of the planet on June 2 & 18 and July 4 & 20.

Uranus is a morning object in Pisces rising at 03:00 as the period begins, though by the end this has become 23:00. It reaches opposition on October 15.

Neptune is also a morning object in Aquarius. By the end of July it rises an hour after sunset and culminates at 03:00 at an altitude of 30°. It reaches opposition on September 2.

Pluto reaches opposition on July 7 when it will be magnitude 14.1 in Sagittarius.

(1) Ceres is a morning object in northern Cetus throughout the months of June and July.

(4) Vesta is also a morning object lying close to the Hyades cluster in Taurus, and too close to the Sun for observation until later in the period. By the end of July it rises at 02:30 which is a little less than three hours before the Sun.

There are several low activity showers during July. The a Cygnids provide activity throughout the summer with ZHRs of about 5, whilst the Capricornids have similar activity but with multiple maxima on July 7, 15 and 25. The BAA Handbook carries full details of meteor activity for the entire year.

In the table I’ve listed events for stars of magnitude 7.0 or brighter although there are many others that are either of fainter stars or those whose observation may be marginal due to elevation or other factors. DD= disappearance at the dark limb, whilst RD= reappearance at the dark limb. The column headed ‘mm’ indicates the minimum aperture required for the event. Once again the Moon finds herself among the stars of the Hyades cluster on the morning of July 29 with a number of bright stars occulted, some of them in full daylight. Times are for Greenwich and in BST. 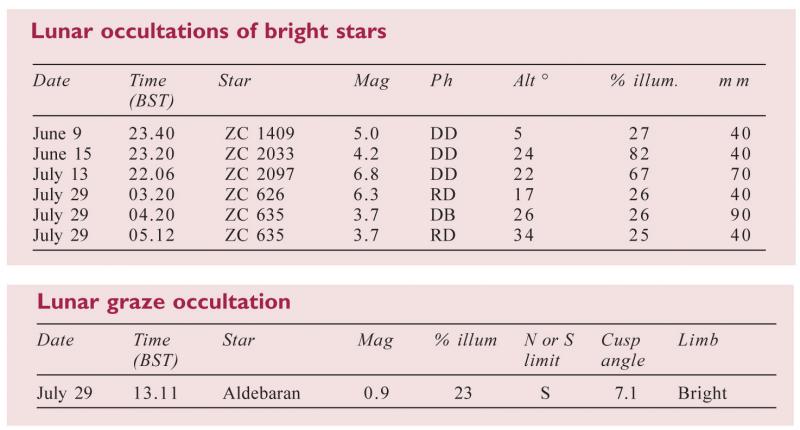 Only one graze occultation occurs during the period in question, and that is a daylight graze of Aldebaran. The graze track passes over the tip of Southern Ireland, across Devon and then onto the Isle of Wight. Times given are in BST. Observers are encouraged to attempt this event and submit results, negative as well as positive, to Tim Haymes at occultation@baalunar section.org.uk. More details are available in the current BAA Handbook.