When you first start in astronomy, you will keep finding references to the word ‘seeing’ quoted in the astronomy books and papers. You will probably have come across the word before and know that it had something to do with the sky – but what did it mean? Was it perhaps concerned with the amount of cloud cover in the sky, or maybe a measure of how clear the sky was in terms of haze? Maybe it was something altogether different? 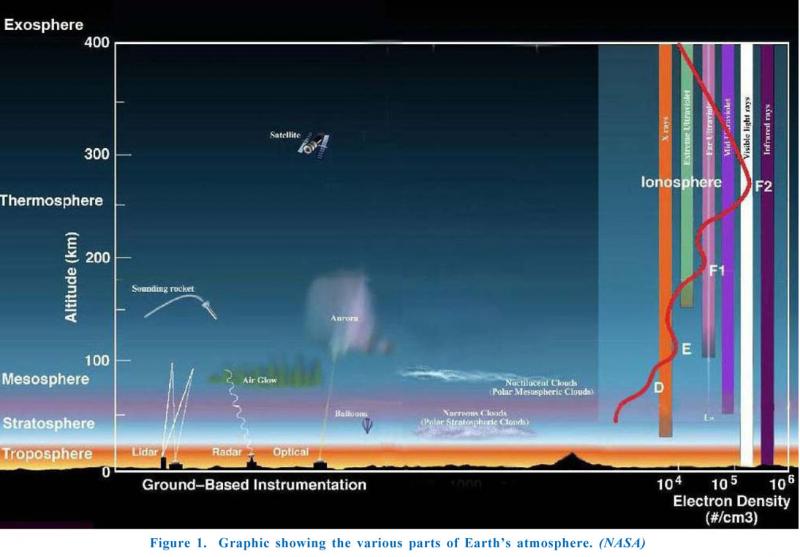 On a calm clear day, it may seem that the atmosphere is quite still and tranquil, but in fact nothing could be further from the truth. The Earth’s atmosphere is extensive and is broken up into various regions (Figure 1). Starting with the troposphere, this region begins at the Earth’s surface and extends up to an average height of about 12km (it is average because the Earth is slightly oblate and not a perfect sphere). About 80% of the atmospheric gases are found here; so too is most of the water vapour and moisture. Nearly all the clouds you see are contained within the troposphere, and so is all commercial air travel. The warmest part of the troposphere is the lowest part, i.e. the surface level – as altitude increases the temperature starts to fall off.

Above the troposphere lies the stratosphere – this extends out to a distance between 50 and 55km above the Earth’s surface, and the two regions are usually separated by a temperature inversion layer – a layer of warmer air beneath a region of colder air. The ozone layer is to be found in the stratosphere: the gases which make up the ozone layer absorb ultraviolet radiation, which is why most of the Sun’s UV doesn’t make it down to the surface of the Earth. 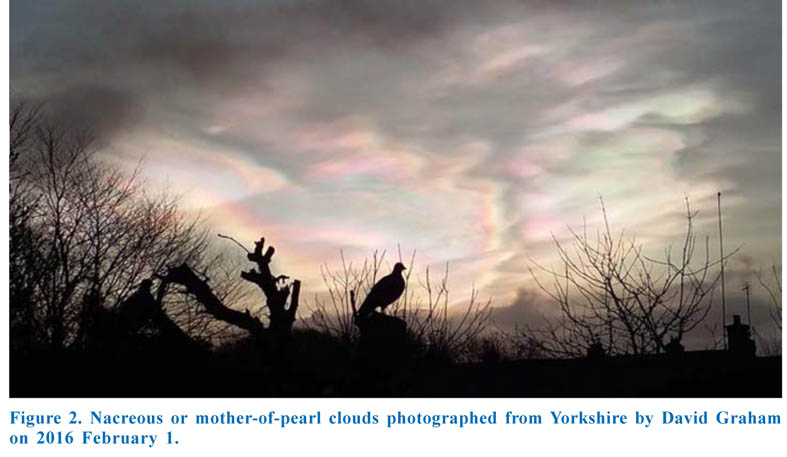 The absorption of UV heats the stratosphere, and the region is very stable, which means we see little in the way of clouds here. There is an exception: Polar Stratospheric Clouds (or nacreous clouds) can form here if a polar winter is particularly cold. These rare ‘mother-of-pearl clouds’ are quite unmistakable, and the best description of them is that they resemble something like an oil slick in the sky! (Figure 2).

The next layer above is the mesosphere, which extends to about 85km above the Earth. It is in this region that noctilucent clouds can be found. Meteors burn up in the mesosphere. Next we come to the thermosphere, which extends out to somewhere between 500-1000km. Aurorae occur in the thermosphere and the International Space Station orbits the Earth within this region. Finally we come to the exosphere, at the very top of the Earth’s atmosphere. Most of the artificial satellites can be found in the exosphere, at the edge of interplanetary space.

As we are ground based observers, all of these layers distort the light coming from the stars and planets. The continual heating and cooling of the atmosphere also has profound effects on the light coming from a distant object. Astronomers have devised a simple way of assessing these effects, which impact on the quality of the observations we can make.

Astronomical ‘Seeing’
‘Seeing’ is a simple measure for how steady the Earth’s atmosphere appears to be. In particular, we use it when we study the Moon and planets – astronomers talk of ‘seeing conditions,’ which give an indication of how stable an object’s image is when viewed through a telescope. The Antoniadi scale, introduced by the great planetary observer Eugene Antoniadi (there is also the Pickering scale but the BAA observing Sections use the Antoniadi scale), is broken down as follows:

Seeing AI:    These are perfect seeing conditions – the image is free from any turbulence and appears very steady in the eyepiece (or on the monitor). This type of seeing is rarely achieved, but it can be found on mountain tops, which is one of the reasons we put telescopes up so high!

Seeing AIII:    Average seeing – there are large air tremors which blur the image but there are also some steady moments allowing us to see some fine details;

Seeing AIV:    Poor seeing – almost constant blurring of the image; there are steadier moments but these are rather infrequent;

Seeing AV:    Very bad seeing, image completely unusable – in such conditions it can be almost impossible to focus the telescope.

It is standard observing practice to assess the conditions and record them with every observation, particularly for lunar and planetary work. This is important because in poor seeing, all manner of artefacts and distortions can occur, particularly with bright planets. Assessing the seeing is essential: if the seeing is AIII or less there is no point in using a high magnification because this will increase the distortions further.

Local conditions
Seeing conditions are actually quite complicated, and they will vary from location to location. The altitude of an object in the sky will also make an enormous difference to the quality of the seeing. Objects low down in the sky usually have poor seeing because their light is passing through more of the Earth’s atmosphere compared with an object right above, therefore the light is distorted more. This is why planetary observers greatly appreciate oppositions which occur with the planet high in the night skies.

Local factors are very important. For example if you have an observatory and it has heated up during the day, you will find the seeing is very poor when you open it as all the heat will distort the image – this is known as ‘dome seeing’. If your telescope is not at the same temperature as the outdoors, all manner of air currents will arise in the tube as it cools down; this will also give you poor seeing even if the object is high in the sky, so always make sure your telescope has time to cool before attempting to use it.

The local land and buildings around the observing site also contribute effects. If you have a lot of concrete in your garden, it will heat up on a summer’s day and as it cools in the evening, that will create local bad seeing conditions. Houses too will contribute, and you will notice in winter that if heat is escaping through the roof, the stars and planets nearby will twinkle quite badly as their light is distorted by the heat.

Finally there is the jetstream: when this is above us it creates very bad seeing conditions, and I have found very often that any planetary work is out of the question, the image being reduced to that of a steam pudding in the eyepiece. Fortunately we can predict where the jetstream is going to be, and the website: http://www.netweather.tv/index. cgi?action=jetstream;sess= is a very useful resource to check.

Always make sure you include a note of the seeing conditions on your observation reports; it gives a quality assessment of your observations, and will allow others to weight them accordingly if you manage to spot anything out of the ordinary!