Comet 29P is a fascinating object measuring almost 60 km in size: one of the largest comets known. It spends all of its time following an almost circular orbit beyond the orbit of Jupiter. Despite no close perihelion passage near the Sun, it has maintained activity ever since it was discovered in 1927 when it happened to have outburst causing the inner coma to significantly increase in brightness. Since then it has outburst virtually every year without fail, sometimes reaching 11th magnitude and usually undergoing several outbursts during its annual apparition.

Despite many hundreds of amateurs training their telescopes on this enigmatic object over the years, no-one has succeeded in capturing it in the throes of a strong outburst – that is until now – when two amateurs have succeeded in achieving the near impossible.

Firstly, thanks to the enthusiasm of French amateur, Jean-François Soulier, who has recently set up a 0.2-m Newtonian telescope in Haute Provence, operated remotely and largely dedicated to continuous monitoring of 29P, weather and skies permitting. (See the 2017 January issue of Astronomy Now, page 35, for more details). Success came during the early morning of July 2nd, the results of a time-series of some 65, 1-min exposures. A plot of his lightcurve is shown in Figure 1. 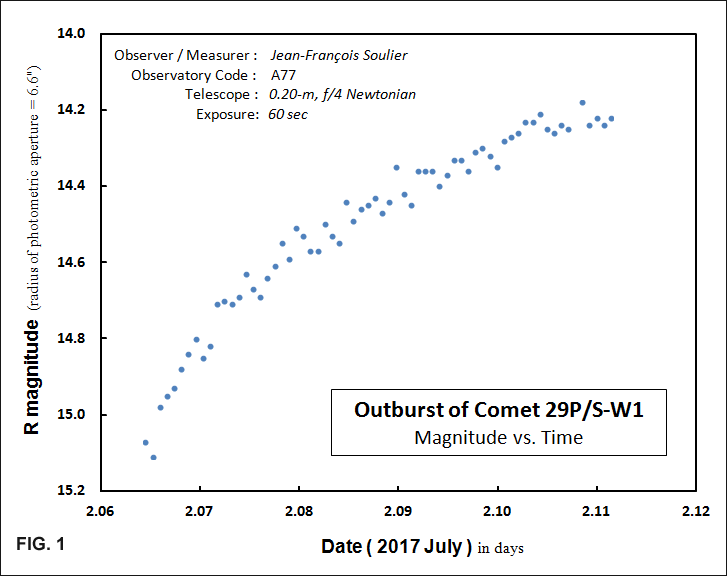 Amazingly, new observations by Spanish amateur CCD observer Juan Jose Gonzalez Diaz have come to light thanks to assistance from Montse Campas and the Observadores_Cometas group. These happened to coincide almost exactly with the time of this strong outburst. That BOTH observers were carrying out a time-series of CCD images at the SAME time is an amazing coincidence especially when it is realised that this is only the SECOND such strong outburst so far during 2017 and that such an event is more or less over and done within a time-window of about one hour! The complete lightcurve now looks like this: 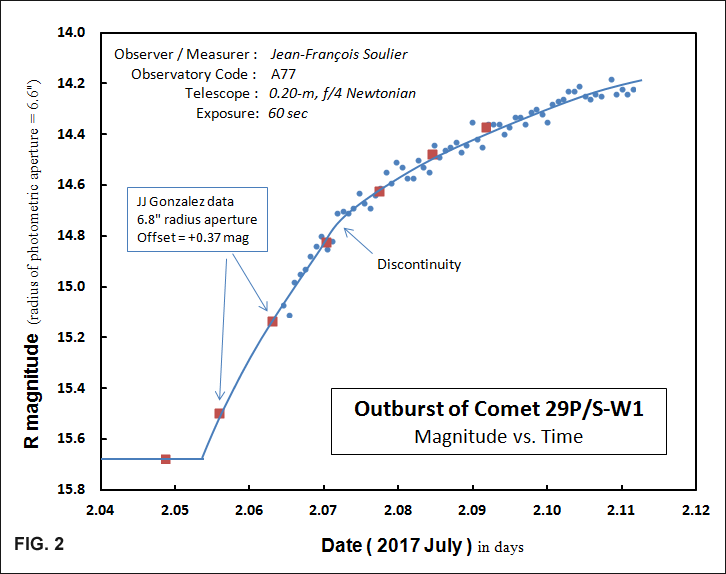 We now see the rising lightcurve began on 2017 July 02.054 +/-0.002 and that after about 26 minutes had elapsed, an apparent discontinuity arose as the brightness ramped upwards, slowing its rise to maximum light which eventually attained magnitude 13.7R. Note that the beginning of the outburst is very sudden and is a singular event reminiscent of a cryovolcanic eruption at the nucleus.

29P’s outbursts develop with unparalleled rapidity and capturing it in the course of the process is a considerable achievement. This has come towards the end of some three weeks of remarkable activity on the nucleus of Comet 29P/Schwassmann-Wachmann 1: we know this thanks to intensive monitoring by observers Jean-François Soulier, John Drummond, Paul Camilleri, Kevin Hills, Gustavo Muler, Ramon Naves, Juanjo Gonzalez and the author. This can be seen from the photometry plot in Figure 3, which for the moment only shows results from the author’s analysis of images taken via the Las Cumbres Observatory telescopes (1.0-m and 2.0-m aperture) and photometry provided by Jean-Francois Soulier from images taken from Chile and France using telescopes of 0.2-m, 0.3-m amd 0.4-m aperture (IAU codes W96, W97, C10 and A77: Chile observations are supported by Alain Maury; A77 Dauban observations by Francois Kugel). Four distinctive outbursts have come to pass in a mere 13 days – something of a record, with the possibility of a 5th mini-outburst interleaved between these. Quite astonishing! 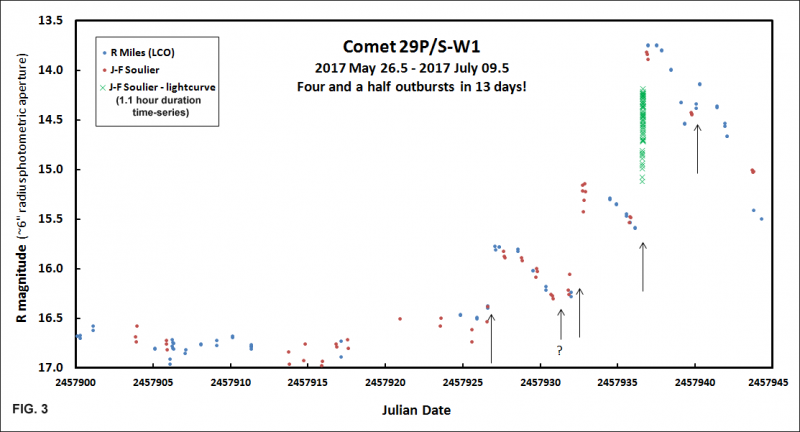 Both observers should be congratulated in what is an entirely unprecedented achievement.