How Astronomers Can Save The Geostationary Orbit

In 1945, the science fiction author Arthur C Clarke wrote a paper in Wireless World which first popularised the concept of the Geostationary Earth Orbit (GEO) satellite. Based on earlier work by a largely forgotten Slovene scientist, Herman Noordung, Clarke’s idea was to exploit the unique orbital altitude (35,786 km) where satellites match the Earth’s sidereal rotation period, (thereby appearing fixed in the sky relative to the Earth, and so providing a convenient location from which to relay telephone communications). 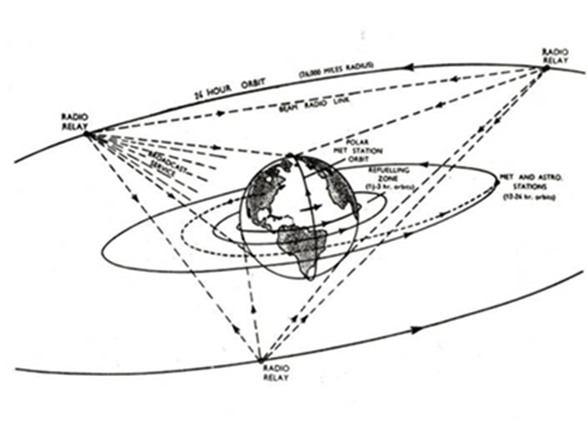 The first truly geostationary, (as opposed to geosynchronous), satellite, Syncom 3, was not launched until 1964, but this prime “orbital real-estate” was soon exploited for civil applications including direct-broadcast TV and weather satellites, and for military missions including missile warning, signals intelligence and data relay. Some science missions, including the solar dynamics observatory, have also been placed in GEO orbit. In the future, such monitoring missions may help to provide warning of extreme space weather events generated by the Sun. We all, therefore, potentially benefit from the satellites in GEO.

But we have a problem. Satellites have finite lifetimes, and so run out of station-keeping propellant eventually. Some also cease functioning earlier in their lives, either as a result of an electrical or mechanical failure, or occasionally, (we suspect), as the result of an unfortunate meteoroid strike. Although most satellite operators now responsibly manoeuvre their ageing hardware into higher “graveyard” orbits before the satellite’s ultimate demise, more than 50 years of GEO operations has resulted in multiple defunct satellites and other uncontrolled debris objects such as rocket bodies which could cause collisions.

And the problem is worse than we thought. Recent observations of the GEO orbit region by the US commercial entity ComSpOC have approximately doubled the number of trackable objects up there, to a figure in excess of 2000, (as compared with the official US catalogue). Some discrepancy between these two catalogues is to be expected, as the US chooses not to publish the orbital data for its military satellites in GEO. But this does not account for the majority of the newly-catalogued objects, most of which are probably debris, and which must have their origins in GEO.

We’re not sure what’s causing this debris, but one possible source of these objects is an unrecorded collision between two defunct GEO satellites. Another is the fragmentation of a satellite which was not properly passivated at the end of its life, which is normally achieved by venting any residual propellant into space, and disconnecting its batteries to prevent a dangerous overcharging scenario in which it could explode. These risks arise because a defunct satellite no longer has an active thermal control subsystem, and so can reach temperatures that it was not designed to withstand. Indeed, repeated thermal cycling is a third process that could lead to materials fracturing and breaking off their host satellite.

But the mechanism which may actually be responsible for much of the debris population could be one that was first identified in connection with asteroids. The YORP effect involves solar energy heating the body in question. As the asteroid rotates, the “hot spot” re-radiates the energy in a specific direction and this can modify its orbit and also cause it to spin up over time. If this mechanism also works on satellites, it is plausible that they are spinning up to the point where they are shedding their solar blanketing material and possibly other larger appendages such as solar panels too. 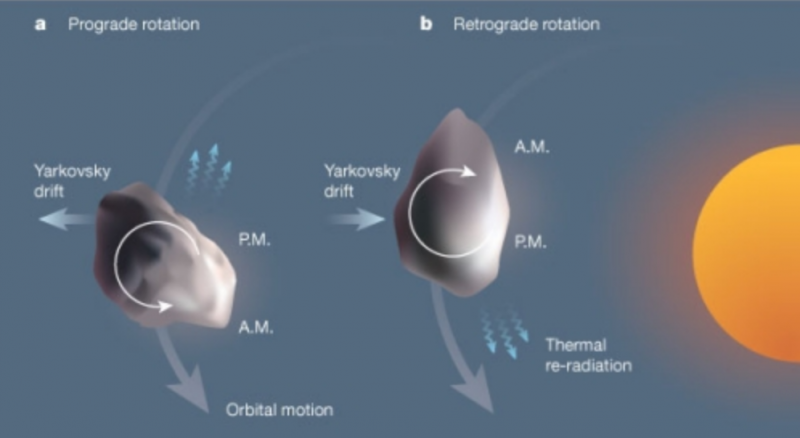 In addition, the variations in the grave-yarded satellites’ orbits caused by the related Yarkovsky effect may modify their eccentricities to the point where their perigee altitudes drop back down to GEO height and create a hazard again.

These orbital changes can potentially be monitored with existing tracking telescopes, but the rotational effects created by the YORP effect, (assuming they exist), are harder to measure and much less well understood. However, help may be at hand.

Astronomers have made photometric measurements for many years, observing variable stars, asteroids, comets and more recently, planetary transits. Indeed, this science is now so advanced that it is possible to detect the intensity variations due to the differing reflective phases of a planet as it orbits its parent star, at intensity levels of one part in 105.
We probably don’t require this level of sensitivity for measuring rotation rates on satellites, (they are irregular shapes, and the projected area seen from the Earth could change significantly over one rotation period, leading to a large variation in apparent magnitude). But what we do need is temporal resolution. The rotation rates of some long-abandoned satellites may have reached 1 Hz, and hence we require much more frequent photometric sampling than is necessary for simply detecting the satellites, or indeed, for observing stars.

If these hypotheses are confirmed by observation, it has two significant implications for the satellite industry. One is that we probably already have some challenging, rapidly-spinning objects to deal with in the vicinity of GEO, and a second is that the current policy of retiring satellites to a super-synchronous graveyard orbit, and then abandoning them, may have to be revisited. 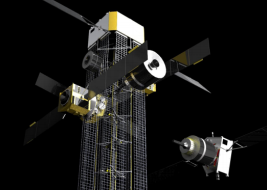 It has been proposed that, rather than being abandoned at the end of their lives, GEO satellites could instead be delivered to a necropolis; an active orbiting repository to which they could be attached. The necropolis would be able to make collision avoidance manoeuvres when required, and could also ensure that GEO satellites were properly passivated at the end of their lives.

For active satellites, this is relatively feasible – robotic technology is already close to having the required capabilities, and various “space tugs” are currently under development. But it is comparatively easy to attach a space tug to a cooperative, stable target spacecraft. Much more challenging is the task of capturing a rapidly spinning or tumbling object that the YORP effect may have created.

To design an appropriate satellite capture system, we urgently need to know what the true state of affairs is in GEO. Ultimately we may need short range surveillance of these problematic objects in GEO via an inspection satellite to see exactly how extended exposure to the space environment has degraded their materials. But the first step to improve our understanding is to reach out to the astronomical community to ask for help in characterising the rotation rates of the most problematic objects.

The objects are 11th – 12th mag and move quite quickly. So this project would be well suited to a telescope equipped with a DSLR or large CCD. The locations of the objects can be tracked via the N2YO website:

The objects can also be displayed in planetarium programmes such as Guide 9 by copying and pasting following italic text into Notepad or similar text editor and saved as a TLES text file.

For further information on this project please contact Roger Pickard, Director of the BAA Variable Star Section, at roger.pickard<at>sky.com.