If we are lucky there will be two comets in binocular range high in the UK sky in mid-April. Comet 41P/Tuttle-Giacobini-Kresak should reach 6th magnitude around the time of its perihelion on April 12 although it could be quite a bit brighter. Comet C/2015 V2 Johnson is also brightening as it approaches its perihelion in June and it could be approaching 7th magnitude by late April. Both comets are very well placed for observation from the UK.

Comet 41P is currently around 8th magnitude. In mid-March it crossed the border from Leo Minor into Ursa Major (41P March.pdf). The comet continues to move north passing relatively close to M108 at mid-day on March 22 before traversing the Plough and moving into Draco on March 30. It should be at its brightest in mid April as it is moving towards the head of Draco (41P April.pdf) passing beta Draconis (Rastaban) on April 19. The comet gradually fades as it moves into Hercules. Comet 41P is prone to pre-perihelion outbursts which can make it brighten by several magnitudes so it it worth keeping it under observation throughout this period. Current images can be found in the Comet Section archive here.

Despite its relatively bright magnitude the comet could be a challenge to observe since it is very diffuse. The coma diameter is approaching the size of the full Moon and so it is best to use the smallest instrument you can to observe it. This is one of those occasions where humble binoculars will give a better view than a large telescope. It is also a good subject for DSLR imaging using medium focal length lenses although the comet is currently moving quickly across the sky (at around 4 arc minutes an hour) so you need to take relatively short exposures to freeze its motion. The picture below was taken on March 20 using a Canon EOS600D camera and a William Optic Megrez 72 refractor. The image of the Moon was taken with the same instrument on the same night and is shown at the same apparent scale. 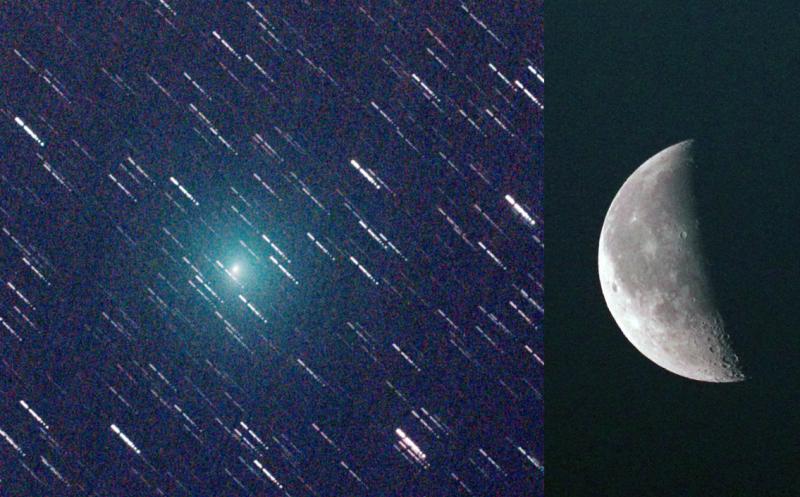 The second comet, C/2015 V2 Johnson is quite a bit fainter than 41P but it looks much more like a comet since it has a nice tail. At present this object is sitting at around 9th magnitude but it is slowly brightening as it heads for its perihelion on June 12. Its path is also shown on the April chart for 41P as it will be found in the western part of Hercules for the next two months. Its track is shown in more detail on this chart (2015v2 March April.pdf). Its apparent size is much smaller than 41P so it is better seen in a telescope. Current images can be found in the section archive here and the image here was taken on March 20 using a Celestron 11 telescope. The field of view of this image is around 20 arc minutes. 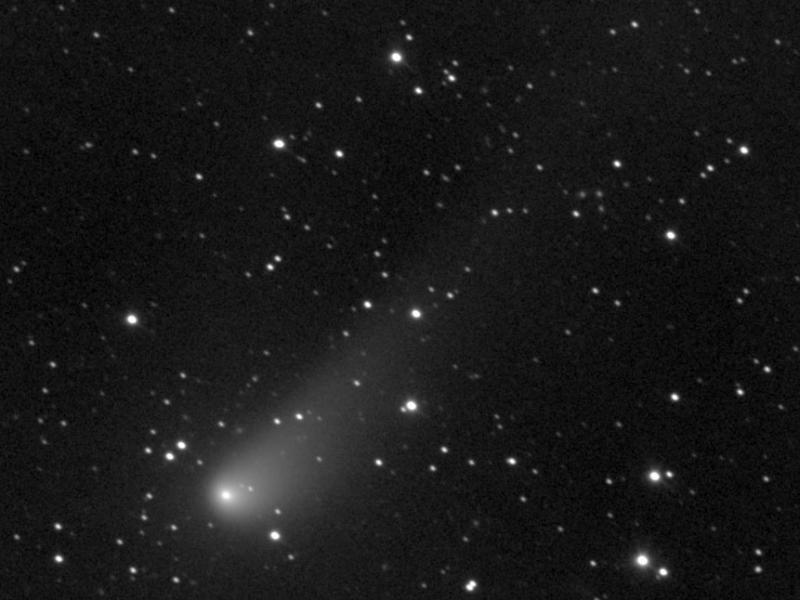 As with all faint fuzzy objects the best observing site has dark skies away from urban lighting. This is particularly the case if you want to try to catch 41P with the naked eye. You also need to avoid interference from the bright Moon which is full on April 11. Don’t despair though if you live in a town or city. Imaging comets is always possible even from quite light-polluted locations and occasionally very transparent nights come along wherethe sky is quite dark even from suburban locations.

If you do manage to get any observations or images of this pair of comets please send them to the Comet Section and post them on the Member’s pages.