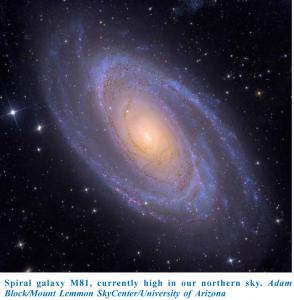 Looking north the zenith lies on Draco’s border with Hercules, indicating that the Dragon is particularly well positioned for its twists and turns to be identified between the two Bears. Ursa Minor points northwards while his larger relation has already begun his descent towards the horizon. That interesting pair of galaxies, M81 and M82, is still reasonably well placed at an altitude of more than 40°. Diametrically opposite the ‘Pointers’ in the Plough, on the opposite side of the meridian, is Cepheus, containing both the Iris and the Elephant’s Trunk nebulae. Between the pole and the horizon lies the rather shapeless form of Camelopardalis (the giraffe) with some imagination being required to see the beast from just the four stars that are brighter than 5th magnitude. Capella is skimming the northern horizon and Perseus, just to its east, is almost fully risen for the new season.

Turning to the east we see that Pegasus has nearly cleared the horizon whilst above it Deneb, in Cygnus, is already at an altitude of 50°. The other two members of the Summer Triangle are moving towards the meridian. Below one of them, Vega in Lyra, is a line of small constellations that reaches down towards the head of the winged horse. From the north moving in the direction of the horizon they are Vulpecula the fox, Sagitta the arrow, Delphinus the dolphin and Equuleus the little horse. Of these, Sagitta and Delphinus are the most obvious with the former certainly having the shape of a mythological arrow, and Delphinus’ leaping dolphin always giving particular pleasure when seen in binoculars.

In the south, Hercules with its smattering of globular clusters, is riding high close to the zenith. M13, at magnitude +5.8, is of course the best known of these although its neighbour M92, a very old example whose brightness is +6.3, should not be overlooked. Hercules, despite being one of the original 48 drawn by Ptolemy, is not the easiest of constellations to find. One method is to begin by locating Arcturus in Bo•tes by following the curve of Ursa Major’s tail. Then draw an imaginary line from Arcturus through Alphekka, the brightest star in Corona Borealis that lies just to the east of Boötes. This line will bring you to the quadrilateral of stars that makes up half of the strong man’s body. Alternatively use the portion of Draco that lies immediately behind its head to point you towards Hercules. Below Hercules lies Ophiuchus along with the two parts of dismembered Serpens, the only constellation to be comprised of two distinctly separate entities. Closer still to the horizon we come to Scorpius and Sagittarius, the latter of which contains the galactic core and provides us with a multitude of galaxies and clusters.

In the west Leo is about to set, with Virgo containing the planet Jupiter, not far behind. Above these we find initially the two small groups of Coma Berenices and Canes Venatici and then closer to the zenith, brilliant Arcturus. Canes Venatici is home to another of the finest northern globulars, M3, whose brightness at magnitude +6.2 should mean it is just visible to the naked eye from a dark sky site. 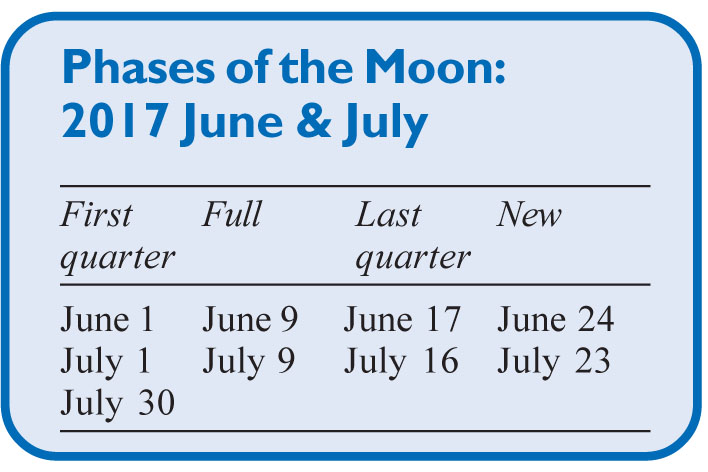 Mercury was at western elongation in mid-May and is too close to the Sun and too low in the sky to be seen at the beginning of the period. It reaches superior conjunction on June 21 after which it moves swiftly eastwards to reach greatest elongation (E) on July 30. Despite an angular distance from the Sun of 27° the planet is poorly placed for observation. At sunset on that date Mercury will be just 7° above the western horizon at magnitude +0.5.

There will be a daylight occultation of Mercury by the Moon on July 25, with the disappearance at the dark limb occurring at 08:33 BST when Mercury will be just 6° above the eastern horizon as seen from Greenwich. The reappearance at the bright limb takes place at 08:53 with Mercury having climbed to an altitude of 9°. The Moon will be a waxing crescent that appears 5.5% illuminated.

Venus will reach greatest western elongation at 46° on June 3 when it rises an hour and a half before the Sun. It will be 15° above the eastern horizon at that time. However, as the declination of Venus becomes more positive the planet can be seen for a longer period before sunrise. By the end of July, Venus is 20° in altitude at the beginning of civil twilight presenting a 74% gibbous phase (at mag -4.0) to the Earth. The next superior conjunction will not occur until 2018 January.

Mars at magnitude +1.7 is lost in the evening twilight at the beginning of June as it sets less than an hour and a half after the Sun. The red planet moves slowly into the solar glare to reach conjunction on July 27. It continues its westward journey to become a morning object in early to mid-September.

Jupiter is still an evening object moving retrograde in Virgo as the period begins, although on June 10 it reaches its second stationary point after which it resumes direct motion. Having been at opposition in April, the planet’s brightness and apparent size are both now on the wane. Its magnitude falls from -2.3 to -1.9 and its angular size drops from 41 to 34 arcseconds during the months of June and July. A waxing Moon is close by on both June 4 and July 28.

Saturn has now made a welcome return to the evening skies, rising at 22:00 BST at the beginning of June. It reaches opposition on June 15 when it will culminate at 01:00 BST at an altitude of just 17° as seen from the southern UK. Unfortunately this state of affairs will continue into subsequent oppositions due to Saturn’s negative declination which is currently 22° below the celestial equator. This coordinate, at opposition, will not be positive again until the year 2026. However the ring system is still superbly displayed with the planet’s north pole tilted towards us by over 26°. At the time of opposition the planet will shine at magnitude 0.0 and exhibit a disk with an apparent diameter of 18.4 arcseconds.

Uranus is a morning object still resident in Pisces, rising under two hours ahead of the Sun at the start of the period. By the end though it rises a little after 23:00 and is more than 45° in altitude by the beginning of civil twilight.

Neptune is in Aquarius and rises an hour before Uranus, so will be an evening object by the end of the period.

Pluto is currently in Sagittarius, just south of the ‘Teaspoon’ asterism. It becomes visible just before midnight at the beginning of June and reaches opposition on July 10.

(1)Ceres is in conjunction with the Sun on June 6. By the end of July it rises well over two hours before the Sun, but at magnitude +8.9 it will be a difficult object.

In the table I’ve listed events for stars of magnitude 7.0 or brighter although there are many others that are either of fainter stars or those whose observation may be marginal due to elevation or other factors. DD= disappearance at the dark limb, whilst RD= reappearance at the dark limb. The column headed ‘mm’ indicates the minimum aperture required for the event. Times are for Greenwich and in BST.

A number of minor showers occur in July whose rates are generally low. The Capricornids are thought to have three maxima on July 9, 16 and 26 when ZHRs should be around 5.

The delta Aquarids have two radiants providing maxima on two different dates, but only the first of these occurs during the current period. The initial maximum takes place on July 29 when ZHRs are expected to be around 20, although the radiant will not rise until 22:30 BST. By this time a crescent Moon will be about to set. The second maximum occurs in early August. These are essentially southern showers because the radiant(s) lie on or below the celestial equator, and in the case of the July maximum the radiant only culminates at an altitude of 22°.