The 2017 apparition of Saturn 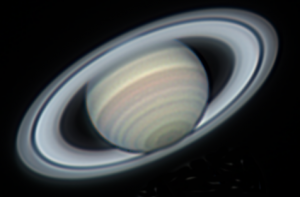 Saturn has been visible in the morning sky for a couple of months now. It will be at opposition on 15 June 2017 and so over the next few months will become observable at more sociable hours.

At opposition, it will lie to the east of Antares, with a declination of approximately -22 degrees. It is almost as far south of the celestial equator as it can get.

For such northern observers, this means that the planet will only be above the horizon for a relatively limited time depending on observer latitude and it will be observed through a much thicker layer of atmosphere compared to when the planet is at a much higher altitude. This not only dims the image but increases the potential for poor seeing. Further, at this time of the year with the application of daylight saving time, it will not get dark until quite late. Still at least the nights are warmer than during the winter.

Despite this, the planet is still well worth observing, not matter what size of telescope is used.

The northern face of the rings is tilted towards the Earth by about 26.6 degrees: nearly at its maximum value. Consequently, the rings will be a magnificent sight even in a relatively small telescope. Under reasonable conditions, I have glimpsed the rings with a 30mm aperture refractor with a magnification of x15 to x20 but I am sure other observers will do far better.

If the seeing is good, then a telescope of 70mm to 80mm aperture and a reasonable high power, then a visual observer may show the Cassini’s division in the extremities of the rings plus at least one belt and one zone. With larger instruments and good seeing, more can be seen.

So far during this apparition, observers in the southern hemisphere have recorded considerable belt and zone structure as shown in the attached figure. Some storm features have also been detected from time to time.

The planet casts a shadow onto the rings but this is hidden by the planet at opposition. Over the coming months this will appear a narrow dark line projected on the rings, adjacent to the planet’s following limb where the rings go behind the planet. This will become broader and easier to see as the planet approaches quadrature later in the year.

Saturn has a large family of satellites; some of which can be seen in amateur telescopes.

The rings do reflect quite a large amount of light. With the current ring inclination, the rings will produce more glare around the planet compared to when the rings appear narrow. Consequently the inner satellites will be easier to see when at elongation from the planet compared to conjunction. Due to a large dark marking on its surface, Iapetus appears brighter when preceding the planet than when following.

For observers at high northern latitudes, the satellites wil appear dimmer as they wil be observed through a thicker layer of atmosphere. Consequently larger aperture telescopes may be required to detect them than described above.

The BAA handbook contains predictions on the positions of the satellites for any time and date. The positions can also be found in the various magazines or by use of the excellent WinJupos software.

It will be interesting to know what satellites and what features can be detected by small telescope. Let me know.

Mike Foulkes. Director of the Saturn, Uranus and Neptune Section