The changing face of Mr G.

There are not many deep sky objects that change very much except for the class of objects known as Variable Nebulae. It is not, of course, that the nebula itself is changing morphologically, but it is thought to be due to variations in the illuminating star.

The Deep Sky Section has an on-going programme to monitor various VNe, and on the whole they have not been varying very much in recent years. But lately one of the objects in the programme has had significant variations in both the star and the nebula. This nebula is colloquially known as ‘Mr G’, but is properly known as Gyulbudagians Nebula and is associated with the variable star PV Cephei.

Nick Hewitt recently used a remote telescope to observe the nebula (2017-07-20) and noticed a change in the fan shape over images last year. 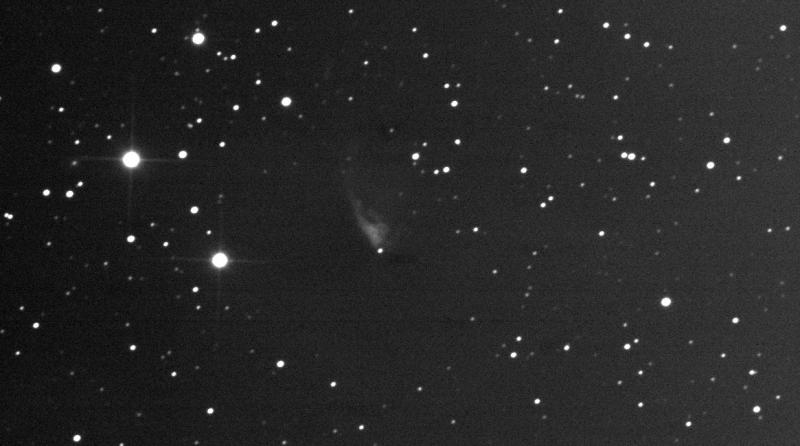 I imaged the nebula late on Wednesday night (19th) either side of midnight BST.  It was taken using iTelescope 7 in Nerpio, Spain. It is a 430mm f 6.8 Planewave CDK. The field was huge so I have cropped the original 3 x 300sec Bin 1.
I am not sure what the nebula has been doing of late but it seems narrower to me. Worth keeping a watch on. I will try either side of the USA.

David Boyd has been actively monitoring PV Cep and the nebula, and writes

Over the first three months of 2017, the Rc magnitude of PV Cep dropped by 1.5 magnitudes from 13.6 to 15.1. Such a large and rapid drop is unprecedented in the 7 years I have been observing the star (see attached light curve) and takes it back to its magnitude in 2014. Whether the fade is an obscuration event or indicates a real change in the output of the star is an open question. Continuing observation might shed light on that (sorry!).

The last couple of months here have been very poor with high level haze even on apparently clear nights. This makes it virtually impossible to record good images of an object as faint as the nebula.

Further ongoing observations by members would be appreciated.