A young astronomer from Coventry received the 2016 Patrick Moore Prize at today’s BAA Meeting in London. The prize was awarded to Thomas Killestein, a 20-year old student, currently in his second year studying physics at the University of Warwick. Thomas is a very keen young astronomer who has produced excellent images of a wide range of celestial objects and who has worked very hard to promote astronomy to a wide audience. 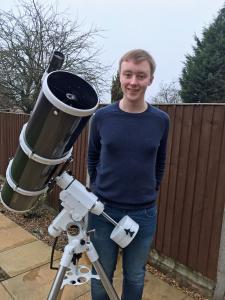 Tom’s interest in both science and the night sky began at an early age, but really developed following acquisition of his first telescope (a 5-inch Newtonian) when he was around 15. He recalls seeing the rings of Saturn and being “completely blown away.” As his interest grew, he joined his local society (Coventry and Warwickshire Astronomical Society), and they sponsored a year’s membership to the BAA for him. He fondly remembers watching the BBC’s Sky at Night programme when he was younger. “Sir Patrick was a great inspiration to me,” he said. “I am incredibly honoured and proud to receive this award.”

Tom continues to be an active member of Coventry and Warwickshire AS. At meetings over the past year or so its members have admired Tom’s pictures of the transit of Mercury, the Orion Nebula, the September 2015 lunar eclipse, a double sunspot, a movie of the motion of Vesta, and a graph of the fluctuations of the variable star BE Lyncis. Tom’s images of the Moon and the North America Nebula have also featured in Sky Notes presentations at recent BAA meetings.

A key aspect of Tom’s interest in astronomy is outreach. He regularly gives lectures and talks at local schools and societies, on subjects such as exoplanets and asteroids. For around five years, he volunteered at his secondary school, helping to supervise and organise sessions for the STEM Club. It was from this that his passion for outreach emerged.

As Tom described, “I am currently the Director of Projects at my University’s astronomy society (Warwick AstroSoc), and regularly lead workshops on the basics of astronomy as well as more technical content like astrophotography and photometry to a diverse audience. I also help run weekly observing sessions, showing people the best bits of the night sky from the campus.”

Clearly, one of the most important aspects of astronomy for Tom is sharing it with other people. “Personally, transient objects like variable stars and asteroids are particularly fascinating for me,” he said, “– both from an observational and theoretical point of view. I find the dynamics behind variable stars fascinating, and I think the role amateur astronomers play in these areas is amazing.”

Each year the British Astronomical Association makes an award in memory of one of its most famous members, Sir Patrick Moore, who died in 2012. Patrick was a very keen visual observer – particularly of the Moon, planets and variable stars – and an enthusiastic promoter of astronomy throughout his life.

The Prize is the most recently-instituted of the BAA’s awards. It consists of £250 and a certificate.

The Prize is awarded for one or more of the following areas of activity, which reflect Sir Patrick’s life and enthusiasms: