What makes for a really good night of observing? An obvious answer is that the skies should be clear, but there are several other factors which also play an enormous part in determining the quality of an observing session. It depends on what you plan to observe – the dark, clear skies needed for viewing galaxies and star clusters are often quite unsuitable for planetary observing. Why should this be the case?

The answer is what astronomers call ‘seeing conditions’: a term very often confused with how clear the skies are. In this tutorial we are going to look at astronomical seeing, how to assess it and a number of other concepts we need to take into consideration, when outside under a clear night sky. 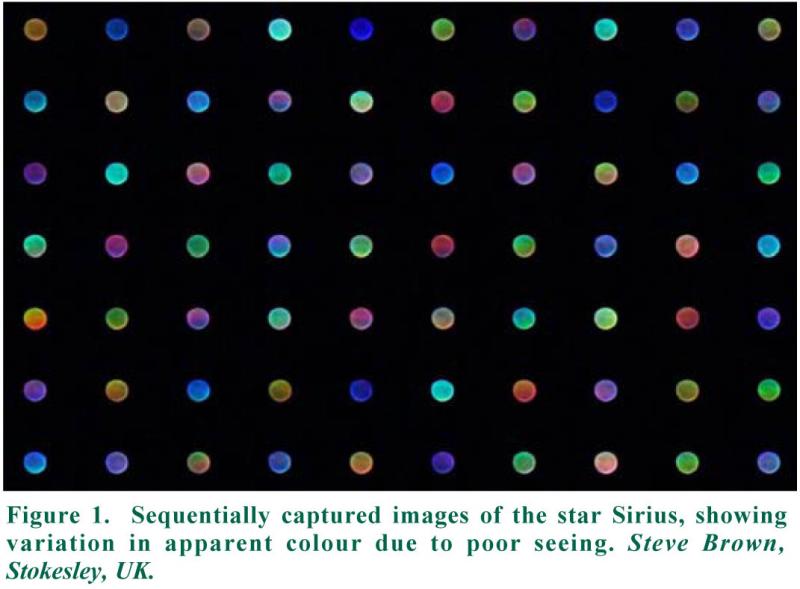 When the skies are dark and clear, the atmosphere may appear to be steady, but a closer look at the bright stars often reveals otherwise. If the stars are twinkling (or ‘scintillating’) quite rapidly, this indicates the air is turbulent (Figure 1). As starlight passes through the atmosphere, the turbulence changes its refractive properties and as a result, the light from stars and planets gets distorted. This is what astronomers mean by ‘seeing’ – the more turbulent the atmosphere appears, the worse the seeing is. The effect is more pronounced for objects lower down as the light has to pass through more of the Earth’s atmosphere.

Viewed through a telescope, the stars are so far away that even in ideal conditions they can only appear as points of light – in poor seeing however, you’ll find it becomes very hard to focus them to fine points. The situation becomes much more marked for the Moon and planets: in poor seeing it may be very difficult to bring a planet into proper focus, as demonstrated by Figure 2. Furthermore, it becomes impossible to observe or image any fine details as they become lost in the distortions. In contrast, deep sky objects like galaxies and nebulae are much less sensitive to poor seeing conditions. 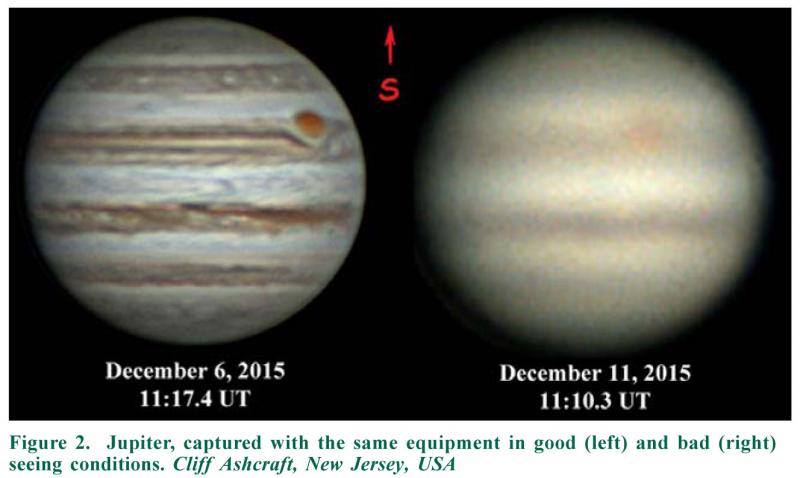 The seeing conditions are not constant – during the course of the day and night they will vary considerably. One of the main reasons for this is the heating and cooling of the atmosphere; during the day the Sun heats the air and ground, and at night the atmosphere cools. Good seeing conditions are often found first thing in the morning before dawn, and in the early evenings not long after the Sun has set. Very often, nights which are misty and slightly foggy are accompanied by excellent seeing conditions, as the air is very still and calm.

Another large factor which affects the seeing is the jetstream: fast flowing air currents which circulate in the Earth’s atmosphere. The seeing conditions in the British Isles are affected by the sub-tropical jetstream. Sometimes this is well to the north of the country, but at other times it may move down and cover the whole of the UK. When the jetstream is positioned above your location, it is likely the atmosphere will be very turbulent, making lunar and planetary observing almost impossible. 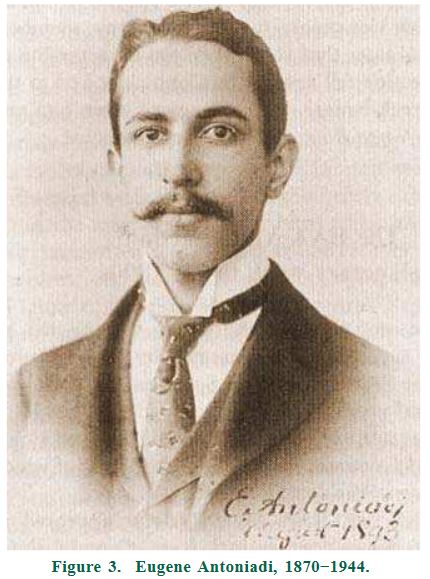 The nineteenth century Greek astronomer Eugene Antoniadi developed a scale for assessing the seeing conditions. It is a scale which goes from perfect conditions (denoted AI) to very poor (AV) and for planetary observations it is defined as follows:
–    AI: Perfect seeing conditions. The image of the planet is absolutely steady. The disk is sharply focused and many faint features, normally very difficult to see, are visible.
–    AII: Good seeing conditions. Some quivering, but the image of the planet is steady for several seconds at a time.
–    AIII: Average seeing conditions. The presence of larger air tremors blurs the image for periods of time, although there are also moments of calm during which the image is steady and observations can be made.
–    AIV: Poor seeing. There are constant undulations in the image – it frequently becomes blurred and unfocused. It can be difficult to make an observation under these conditions.
–    AV: Very bad seeing. The image is continually quivering and being distorted. It is impossible to focus the object and nothing useful can be done.

It is a good idea to note the seeing conditions when you make an observation; if the seeing is average, or poor, then it might affect how much you can usefully record.

Local seeing and other conditions

The atmospheric changes we have discussed so far are large scale. In fact, there are many other effects much more local to your observing site, which will also contribute to your local seeing conditions.

You will find that houses which have poor insulation also release heat at night, so the appearance of any objects near to the rooftops will suffer from local bad seeing. If you store your telescope in the house and take it out on a cold winter night, the warm air in the tube will cause bad seeing – you must always wait until your telescope is at the same temperature as the outside air before you start observing.

If you have an observatory, this can also be a source of local poor seeing – if it has been a warm day and you have a concrete floor, this will heat up and then release the heat at night. You should therefore always make sure you open your observatory for a few hours before you observe.

A number of jetstream forecasts are now available online, and it is a good idea to consult these to see where the jetstream is likely to be when you are observing. You may find it is out of the way, in which case it won’t affect your conditions. However, if it is right overhead, it might be a good idea to concentrate on variable stars and deep sky objects, as the Moon and planets are likely to be greatly affected by it.

In the case of local conditions, there is nothing you can do about concrete or other houses, but you can make sure your telescope is at the same temperature as the outside. It is also sensible to observe your target when it is at a reasonable altitude (although this can be quite difficult when the planets are to be found in the southern skies).

If you are observing in average seeing conditions, then it is a good idea to use a lower power on your telescope – high magnifications will amplify the distortions caused by the turbulent air even further, making a reliable observation impossible.

Today’s professional astronomers have found ways around bad seeing: a number of large telescopes now employ ‘adaptive optics’. Essentially the mirrors of such telescopes are continually deformed in such a way as to cancel out the distortions. Such systems are very expensive and highly technical however, so for now at least, amateur astronomers using ordinary telescopes have learned to make the most of good seeing conditions when they arrive.