Checking up on a cataclysmic variable in Cepheus

Would you like to help monitor an intriguing variable star? Here’s how…

The light curve over the last 12 years appears to show almost continuous low amplitude outbursts of ~0.7 mag for much of the time. Each outburst lasts ~12 – 14 days and the star varies between mag ~13.6 and 14.3. There are two intervals of 100 – 200 days when these appear to reduce or even stop. This is reminiscent of Z Cam behaviour, although this classification is by no means certain (Z Cam is the prototype of a class of dwarf novae which exhibit outbursts, interspersed by times when the star’s brightness is constant). Prof. Boris Gänsicke (University of Warwick, UK) suggests that the low amplitude could mean that only part of the accretion disc takes part in the outbursts, so it may be very close to the borderline of disc stability.

Boris has suggested that intensive observations over a few outburst cycles may shed further light on the behaviour of the system. I would therefore like to request observations of HS 0229+8016 from now and continuing for the next three months (until end Feb 2019). We would like one (or a few) observations per night to define the overall outburst light curve and whether there is a quiescence period between outbursts. CCD observations with a V-filter are preferred, but unfiltered is fine if you don’t have a V-filter. Visual observations are also gratefully received. Continuous photometry is not required at this point. 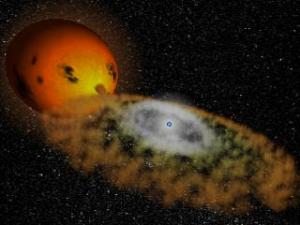 Impression of a cataclysmic variable by Dr Andrew Beardmore