Whilst it is the best for fifteen years, for observers at UK Latitudes, it is in very nearly the worst place, being very close to the horizon. This is one of the reasons this is being labelled a challenge. For observers in more southerly latitudes it is not such a challenge in this regard.

The graphic above is from Stellarium and shows the Southern Horizon at 23.00 hours on the 31st July from UK latitudes. It shows how low in the sky Mars is at this time. The horizon shown does not include any landscape features which will need to be taken into account for your own local conditions.

At around the time of Opposition, Mars is in Capricorn, moving with a retrograde motion. In addition to the challenges mentioned, dust storms are apparent on the planet which may, or may not, be present at the time of opposition. So, there are several challenges within this one challenge.

At the beginning of July, Mars will be at about -2.1 magnitude and about 21 arc seconds diameter. Dust storms aside, the entire surface of Mars should be able to be seen during the month of July. For example, Syrtis Major should be visible by about the night of July 7th. 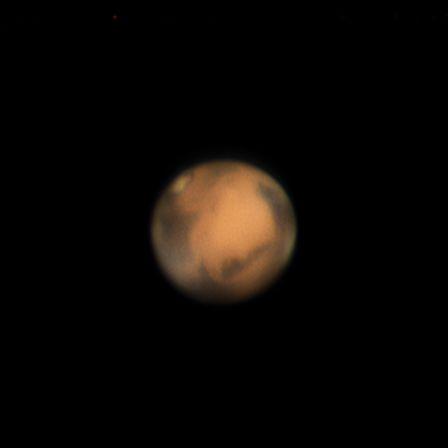 This image of Mars was taken by James Dawson. It was taken on 16th April 2014 from Nottingham. A C11 was used with a one shot colour camera. The exposure was 120 seconds at 80fps. James’ member area is at https://britastro.org/profile?id=645

As well as images, sketches or drawings of Mars are also very welcome. Shown here is a very nice observation taken by Paul Abel on the 23rd June 2018. 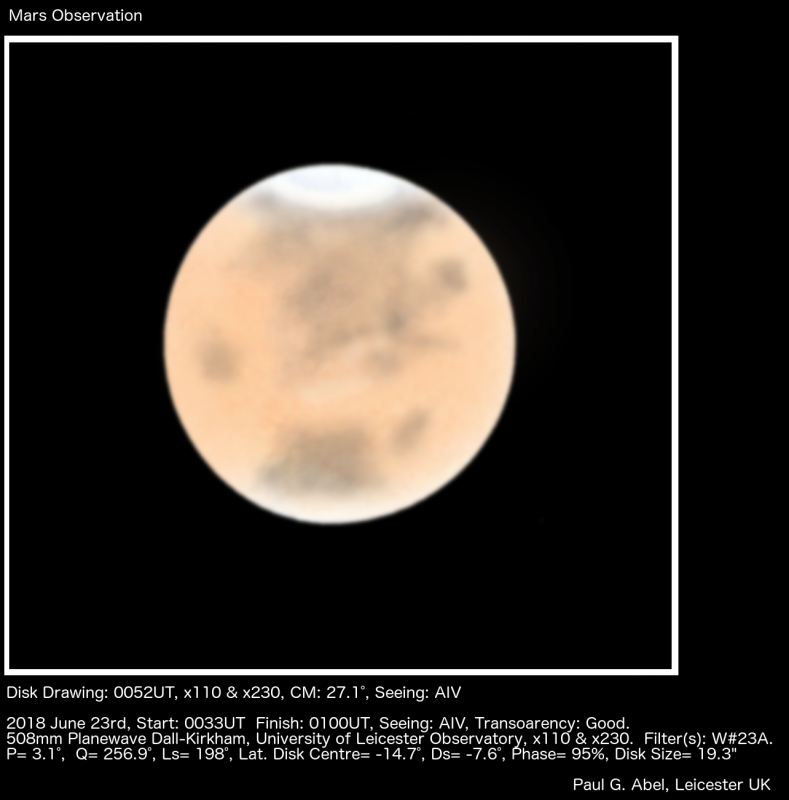 Paul’s Member area can be found at https://britastro.org/profile?id=793

This observation is entitled ‘A dusty Mars’ so the dust storms are starting to take effect.

Another challenge which has been recommended by Dr Richard McKim is to make observations of the brightness of Mars over the next couple of Months as Mars approaches and then passes Opposition at the end of July.

One way of doing this is to make a judgement on the magnitude of the Planet against some nearby bright stars. There are several bright stars fairly near to Mars at the time of Opposition.

These are listed in the table below.

Richard would be very pleased to receive any such observations. Very few people did any at the time of the last Opposition, thus this would be a useful addition to the scientific record for Mars.

Please send any of these observations to Richard at the link mentioned above.

Hopefully there is something of interest for you to take on for this forthcoming Mars Apparition.