The Motion of the Planets

When present in the night sky, the bright classical planets of antiquity – Mercury, Venus, Mars, Jupiter and Saturn – are quite unmistakable. It is clear that they are something different from the rest of the stars, shining as they do in soft pastel shades drawing the eye towards them.

These five planets have been known since ancient time; the early astronomers saw that they moved through the night sky unlike the rest of the stars which seemed to remain fixed. The Babylonian astronomers were among the first to record the positions of the planets, and kept tables of their motion in the heavens. The Greeks called them ‘wandering stars’, which is the origin of the name ‘planet’.

Over history there have been many attempts to explain the motion of the planets, but it took the genius of Isaac Newton, the observational skills of Tycho Brahe and the brilliant determination of Johannes Kepler to formulate the laws of planetary motion which explain why the planets appear to move in the way they do in our night skies.

In this article we will look at the basics of planetary motion and explain what the commonly used terms like opposition and conjunction mean. I will spare you the full mathematical treatment, but learning a little about planetary motion will enable you to plan your planetary observing sessions and get the most out of your telescope when the planets are in the sky.

The motion of the planets in the sky

The motion of the planets in the night sky is interesting to follow. You will find that the planets are always to be found in certain constellations – Mars could never be seen in Ursa Major for example. Why should this be the case? The answer is due to the orbits of the planets themselves and how their orbits lie in relation to the Sun.

If you were to plot the line of the Sun’s path in the sky over the course of a year, you would find that it passed through just 13 constellations – the 12 constellations of the zodiac and the constellation of Ophiuchus the serpent bearer (quite why this is not included in the zodiac I have no idea). This line is called the ecliptic, and the bright planets are always to be found on or close to the ecliptic. This is because the orbits of the planets all lie in a plane about the sun’s equator and as a result, they are never far from the ecliptic.

How long a planet spends in a constellation depends on the length of its orbital period. Jupiter takes 12 years to orbit the Sun, and so will on average spend about a year in each constellation. Saturn however takes 30 years – this is great for us when the planet is in Taurus or Gemini as it will spend many years in the northern constellations. Conversely it means it will also spend a long time in the south. 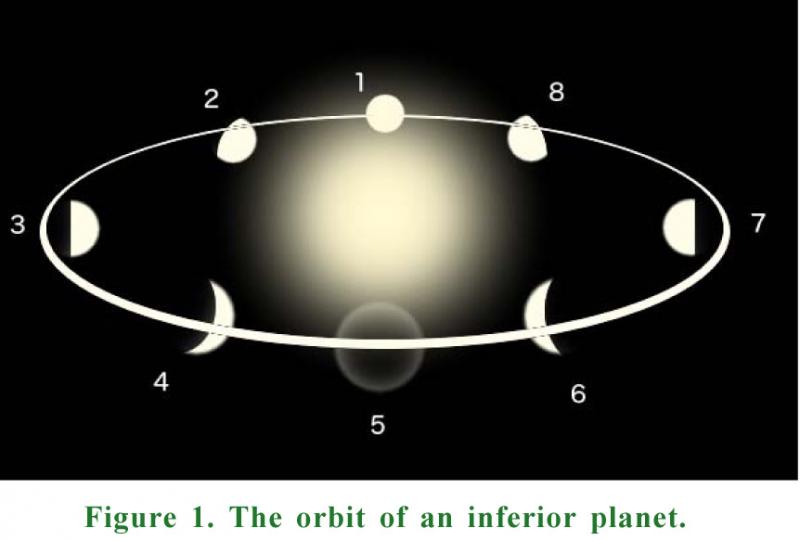 The inner planets, Mercury and Venus, are referred to as ‘inferior planets.’ This is not a derogatory statement – it simply means they are closer to the Sun than is the Earth. In Figure 1 I have given the orbit of an inferior planet; it can represent either Mercury or Venus, the only difference being that Mercury goes through the cycle quicker.

Starting at position 1, the planet is said to be at superior conjunction. In this context conjunction simply means ‘very close to’. Due to the nature of planetary orbits, most times Mercury and Venus do not lie directly behind the Sun at this point, but they are very close to it and so it is difficult to observe them at this time. Position 1 marks the start of an eastern elongation, and the planet is now to be found in the evening skies.

As the elongation continues, the planet is starting to move towards the Earth. It will continue to increase in apparent size, and the visible phase of the planet starts to decrease as can be seen at position 2. At position 3 we have arrived at the time of dichotomy and the planet appears as a half moon shape. The planet continues to move towards the Earth reaching greatest eastern elongation at position 4. This means that the planet is as far from the Sun as it can reach in the evening sky. From our point of view the planet now starts to move back towards the Sun in the evening sky until it reaches position 5 where it lies effectively between the Sun and the Earth. This is inferior conjunction and the planet is not observable due to its close proximity to the Sun.

After inferior conjunction, the planet moves into the morning sky as it embarks on a western elongation. It will continue to move away from us and at position 6 reaches greatest western elongation – its furthest distance away from the western side of the Sun. The phase is now increasing, and the crescent will continue to grow whereby it reaches dichotomy again at position 7. The apparent diameter shrinks and the planet gets closer to the Sun as we reach position 8. Finally the planet comes to superior conjunction and emerges into the evening sky, and the whole cycle begins once more. 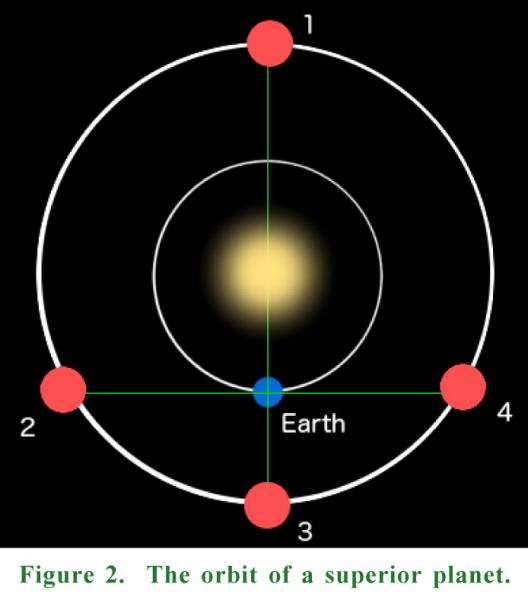 The planets in our solar system beyond the orbit of Earth are called superior planets. For the outer planets we speak of apparitions and oppositions. Unlike inferior planets, the outer planets can be visible all night and are not confined to appearing either in the morning or evening skies.

In Figure 2, I have given the orbit of a superior planet. Starting at position 1, the planet is at conjunction and is too close to the Sun in the sky to be observed. The planet emerges into the morning sky and has begun an apparition. It will continue to rise earlier and earlier in the night until it starts to rise before midnight. At position 2, the planet is at eastern quadrature and makes a right angled triangle with the Earth and the Sun. It is 90° away from the Sun (on the eastern side). Eventually the planet will reach position 3 where it is opposite the Sun: this is the time of opposition, which is the best time to observe it since the planet will be at its highest point at midnight and visible all night. The planet will then move to western quadrature and will again make a right angle with the Sun and the Earth. The planet will continue to rise earlier and earlier, until it’s only visible in the evening twilight before it sets. Eventually the planet will disappear into solar conjunction once more and this marks the end of one apparition and the start of another.

The time taken for a planet to pass from one conjunction (or opposition) to the next is called a synodic period. For Jupiter this is about 13 months, so Jupiter spends about one year in each of the 13 constellations the ecliptic passes through. Mars’ orbit however is rather elliptical and as a result it takes just over two years to go from one conjunction to the next. This is the reason why we only have a Mars opposition about every two years. Moreover, not every opposition is favourable. Perihelic oppositions occur when Mars comes to opposition when it is close to the Sun. At this time, Mars is closer to Earth and so its apparent diameter is rather large, however it is low down in the southern skies for UK observers. Conversely, aphelic oppositions whereby Mars comes to opposition when it is furthest from the Sun see the planet residing in the winter constellations and so it is high in the sky, but alas the planet is further away and so Mars has a much smaller apparent diameter. For UK observers, the oppositions in between are best with a mixture of reasonable size and being reasonably placed in the sky.

The laws of planetary motion

In the late 16th century the Danish astronomer Tycho Brahe made many observations of the planets, carefully recording their positions night after night. After Brahe died Johannes Kepler used his observations, and devised his three laws which govern planetary motion. 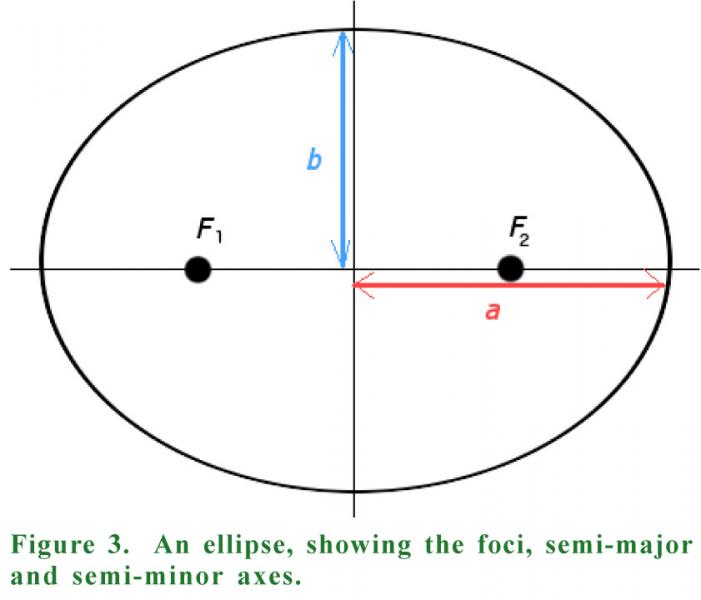 Kepler’s first law is very simple: it states that all planets move in elliptical orbits about the Sun, with the Sun at one focus of the ellipse. You can think of an ellipse as a squashed circle, and the amount it deviates from being a perfect circle is called its eccentricity, e. As you can see in Figure 3, an ellipse has two points of focus (foci), F1 and F2, and in a planetary orbit the Sun sits at one of these positions. If we bring F1 and F2 together so they are one point, our ellipse becomes a circle. The distance a is called the semi-major axis, while the distance b is the semi-minor axis.

Kepler’s second law states that a line joining the Sun and a planet sweeps out equal areas in equal times. Simply put this means that a planet moves quicker in its orbit when it’s closer to the Sun, and slower when it is furthest away. Perihelion is the name of a point on an orbit which is closest to the Sun, and conversely aphelion is the point on an orbit which is furthest from the Sun.

Kepler’s third law is probably the most useful. It relates the period of a planetary orbit T to its semi-major axis. Kepler found that the square of a planet’s period is proportional to the cube of its semi-major axis. So if you know how long it takes a planet to go around the Sun, using Kepler’s third law you can work out how far away from the Sun it is!

Once astronomers were armed with this useful information, they wasted no time in putting it to use. Edmund Halley was the first to use the laws of planetary motion to show that the comet which now bears his name had an orbital period between 74-79 years, and had been observed many times in the past.

You don’t need to be a mathematician to appreciate the laws of planetary motion: the dates of greatest eastern/western elongation, conjunction for the inferior planets and opposition dates for superior planets are all published in the BAA Handbook. You can use these times to plan the best time to observe – if you don’t have a large telescope, opposition is a particularly good time to examine Mars, for example. This year it occurs in July. Planetary motion is another useful tool for the amateur astronomer!