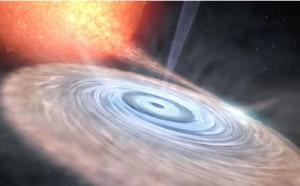 Introduction to HR Lyr: a century of observations

This year is the centenary of the discovery of Nova Lyrae 1919. HR Lyr, as it is now known, was a magnitude 6.5 nova discovered on 1919 December 6 by Miss Mackie at the Harvard College Observatory. The decline from outburst was fairly well observed and showed a rapid (t3 ~ 80 days) and smooth decline. A review of the photometric history of HR Lyr was present in the BAA Journal in 2007 [1], finding that the system has been relatively stable at V ~ 16 ever since occasional post-nova monitoring (initially visual observations) began in 1925. More recently, the 22-year light curve between 1991 and 2012 was presented [2] which showed the system varied over the range V= 15.3-16.3 with occasional excursions to V~17. One these fades, in 2010, was discussed in the BAA Journal [3] and a further fade occurred in 2016. The light curve variations often take the form of nearly linear rises and falls on a timescale of about 100 days. Occasional ~ 0.6 mag outbursts were also seen, with properties similar to those found in some nova-like cataclysmic variables. Overall, there was a decline of 0.012 ± 0.005 mag/yr, similar to that seen in other post-novae.

Recent data from ASAS-SN suggests a period of 613 days [4], but this might not be statistically significant.

Scope and objectives of the 2019 campaign

Apart from photometric monitoring, HR Lyr has not received much attention. The aim of this campaign, which will run until the end of 2019, is to deepen our understanding of the photometric behaviour, on a range of timescales, as well as attempting to characterise its spectroscopic properties and variations.

It would be wonderful to shed some light on HR Lyr’s behaviour some one hundred years after Miss Mackie’s discovery!

To determine the overall light curve of HR during 2019, nightly observations are requested to provide a “snap shot” of how the star is performing and to monitor for the ~0.6 stunted outbursts that have been seen previously.

Observations can be visual (if you have a sufficiently large telescope) or CCD. V-band photometry is preferred, but if you do not have a V-filter, then unfiltered will also be acceptable. In addition, B- and R-band measurements will also be appreciated to see if there are any colour variations over the course of the campaign.

Sequences for HR Lyr can be downloaded from the AAVSO Variable Star Plotter [5]. Observations should be submitted to the databases of the BAA Variable Star Section or the AAVSO, preferably as soon as possible after the observation is made.

Rather little time resolved photometry is available for HR Lyr, so a major aim of the programme is to carry out several long photometry runs to see if there are any periodicities or other significant variations on a timescale of minutes to hours. A team at the Wise Observatory observing in the 1990’s found quasi-periodic variations around the period 0.1d, which they speculated may be associated with the orbital period [6]. However, no independent measurement of the orbital period of HR Lyr has been published. Perhaps our work will confirm of refute this. Ideally, runs of several hours should be performed if we are to identify signals with a period of ~0.1.

Again V-band photometry is preferred (plus other bands if available), but if this is not possible, unfiltered is fine. Again, observations should be submitted to the international databases.

HR Lyr is even less well characterised spectroscopically than photometrically! Its H-alpha profile in 1993 and in 2008 was composed of a sharp central peak having a FWHM of ~10 Å, plus a broad shallow base with typical FWHM of ~40 Å. In the 1993 spectra no changes were visible from night to night [2]. However, the line profile changed between the two adjacent 2008 nights. The H-alpha line showed a sharp central peak alongside a broader base which is not common among old novae, but is similar to the emission line profile described for the old nova DQ Her. There was no convincing evidence for a decline in the H-alpha line widths over the interval 1986–2008. The spectral appearance of HR Lyr during the 2010 dimming episode was quite different from that exhibited during normal quiescence; the spectrum 2010 spectrum was characterised by a smooth bluish continuum with superimposed strong emission lines [7].

Spectroscopy at various time during 2019 will be helpful to identify any changes in the spectrum (as found in 2008) and, if there are changes, whether these can be correlated with gross changes in the photometric light curve.

Spectroscopy of such a faint target represents a real challenge with amateur equipment. Almost certainly too faint for high resolution line profile measurements, it is probably just accessible with a low resolution instrument. It will be interesting to see whether it is possible to get worthwhile results.

Updates on the campaign will be given from time to time via the BAA VSS Alert email group [8] and on the Forum of the main BAA website.