Is Betelgeuse about to go supernova?

Have you noticed that the constellation of Orion looks slightly odd at the moment and that Betelgeuse (alpha Orionis) looks a little dimmer than usual? Well, that’s because Betelgeuse has been fading slightly for the last few weeks. It’s now fainter than it’s been for quite a few years, but not unprecedently so.

This has promoted speculation that Betelgeuse is about to go supernova. Could that be the case? Probably not, but read on….

The variability of Betelgeuse was first noticed by Sir John Herschel in 1836 and it has been followed ever since. When at maximum it can rise to magnitude 0.4 when it can rival Rigel. At minimum brightness, as in 1927 and 1941, the magnitude may drop below 1.2. In the late 1970’s it reached magnitude 1.5. Recent observations put it at a similar level, between 1.3 and 1.5.

Betelgeuse is a pulsating red supergiant. Its diameter varies between the size of the orbit of Mars and at maximum diameter may equal the orbit of Jupiter. Its brightness varies in a complicated way as there are multiple periods. The main variation takes place over about 420 days.

Betelgeuse is in the last stages of its evolution and it is expected to explode as a supernova within the next million years. Some recent sources estimate a supernova event from today to 100,000 years. So will it go off tonight? Probably not, but keep looking! When it does explode, it will be visible in the daytime sky.

It certainly provides a great opportunity to take friends and family outside over the Christmas and New Year period to view Orion and Betelgeuse.

A chart can be downloaded from the VSS website. 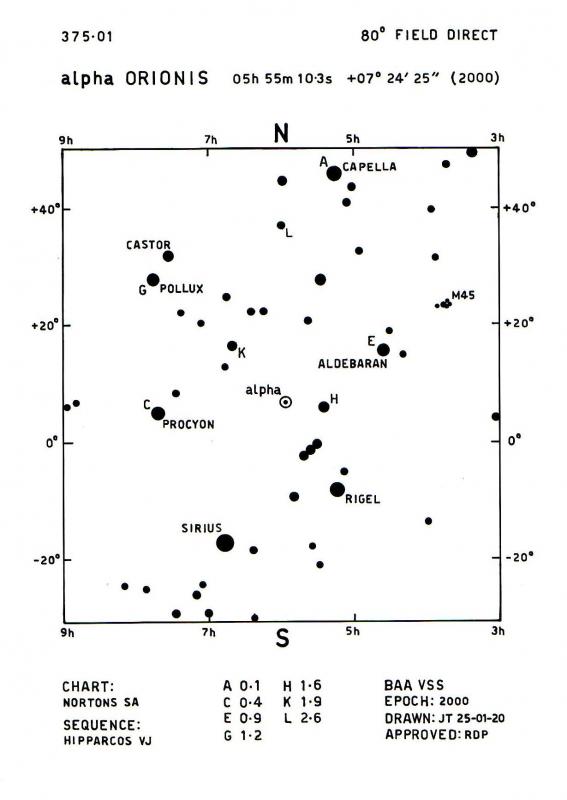