On 20th July 1969 the lunar module of Apollo 11 touched down to deliver the first two human beings to the surface of our Moon. Few of us will be unaware that this year marks the fiftieth anniversary of that event, the greatest achievement in manned exploration so far. Unmanned spacecraft have gone much further, and have arguably delivered more science results, but none has matched Apollo 11 for courage, excitement and human challenge. This anniversary will no doubt be marked in many ways throughout the world.

Those who were alive at the time will never forget the excitement of those days in the summer of 1969, but there is a way in which we can replicate it. By the evening of 8 July 2019 the Sun will have risen over the general area of the Apollo 11 landing site and the Moon will be visible in the evening sky, although it will be quite low as seen from mid-northern latitudes. The general area of Tranquillity Base is easy enough to locate. If you look towards the southwest corner of Mare Tranquillitatis you cannot miss the striking pair of craters Sabine and Ritter. These are almost identical in size at around 30 km in diameter, so they are easy to spot even in a small telescope. The Hypatia rilles lie just to the south of Sabine, and these can be picked up in a medium-sized telescope. The image below shows Sabine and Ritter just above and to the left of centre. If you look to the east of Sabine you will see a row of three small craters, now named Aldrin, Collins and Armstrong (from west to east) after the Apollo 11 astronauts. With diameters of 3.4km, 2.4km and 4.6km respectively, these will be a test for the visual observer using a moderate-sized telescope (150-200mm aperture) and will require reasonably good seeing conditions, particularly given the Moon’s low altitude on the evening in question. They will be much easier targets for the imager using a planetary camera. 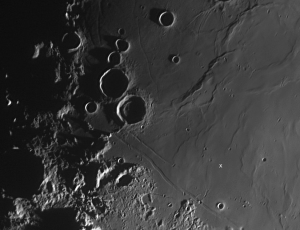 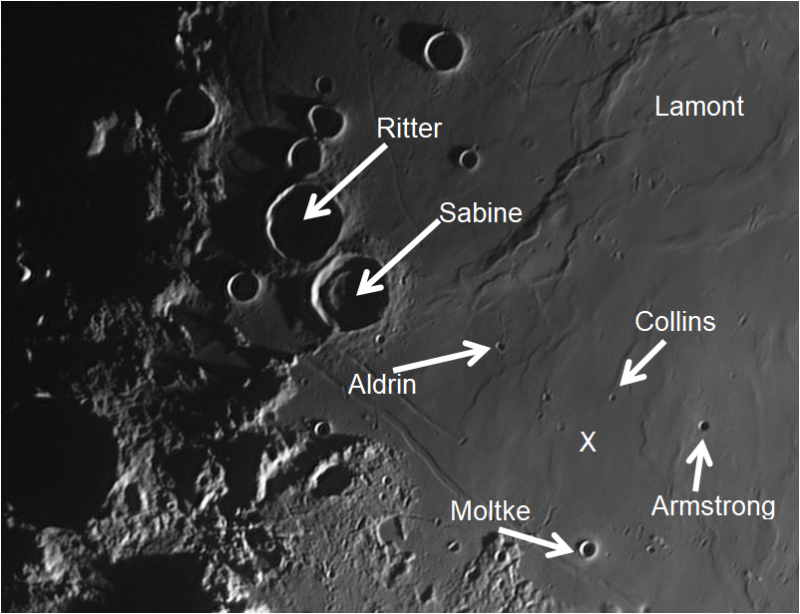 Tranquillity Base is located to the south of Collins, the middle crater of the three, and it is marked with an X on the image. Of course the remains of the Lunar Module and the various pieces of equipment deployed by Armstrong and Aldrin during their extra-vehicular excursions are too small to be visible from Earth, even with the largest telescopes, but they have been successfully imaged by orbiting spacecraft.

Don’t worry too much if you are clouded out on the evening of 8 July; the area will also be well seen over the next few nights. It can also be seen under local late afternoon-evening Sun on 22 July. This latter date is closer to the anniversary, but you will have to get up in the small hours of the morning to catch the waning Moon, and once again it will be low in our skies.

Good luck with this challenge and the opportunity it presents to relive those heady days of July 1969. Do share any images or drawings you acquire on the Members’ pages!

Director of the BAA’s Lunar Section

The story of the Apollo program and the BAA Lunar Section has also been written about by Bill in the June 2019 edition of the BAA Journal.