We have two bright asteroids reaching opposition almost on the same night this April, which reason
makes them a suitable observing challenge. Both objects will be highest in the sky around midnight UT
(1.00am BST) on April 5/6, or on April 6/7, so should be easy targets during the late evening.

Here’s a diagram adapted from Wikimedia Commons showing the actual sizes of the  two objects, namely (2) Pallas and (7) Iris in comparison with the size of our Moon. 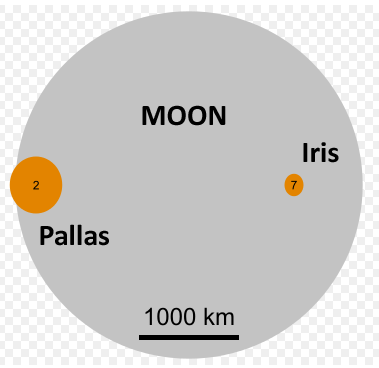 Asteroid (7) Iris reaches opposition on 2019 April 05.5 whilst asteroid (2) Pallas achieves its
opposition on 2019 April 06.8, i.e. about 31 hours later. Both are bright objects visible in
binoculars or in a small telescope: Iris reaches a mean V magnitude of 9.36, whereas Pallas attains V
magnitude 7.87 and will be situated well north of the Ecliptic lying just 3.9 degrees from the bright
star Arcturus (p.a. 241 deg) in the constellation of Bootes. See the finder chart for Pallas at:
https://britastro.org/node/15948 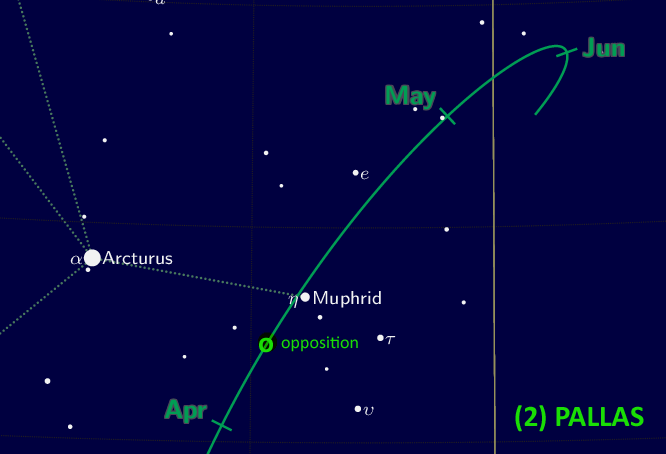 Iris at opposition will be located south of the Ecliptic in the constellation of Corvus some 1.4 deg

south (p.a. 141 deg) of Messier 104, the Sombrero Galaxy, which it appears closest to on April 9 at a
little under 1 degree so both the galaxy and the interloper should be visible in the same low-power
telescopic field. More details and a finder chart can be found at:
https://britastro.org/node/15946 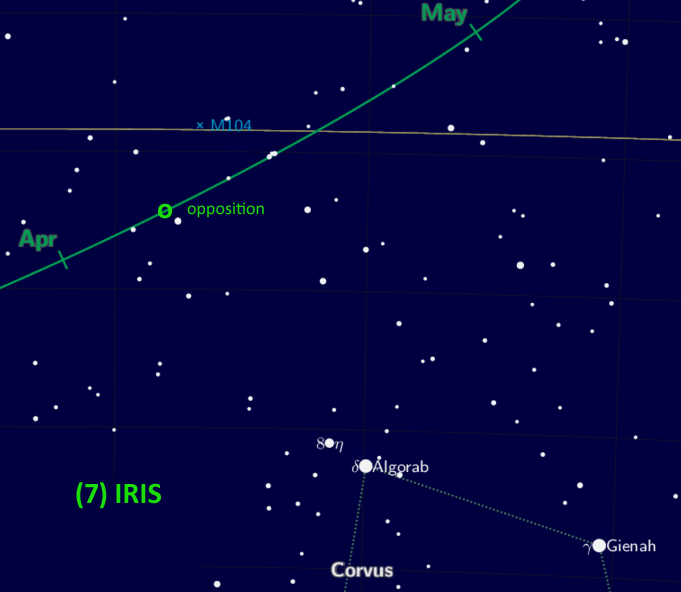 As part of the challenge, try noting the arrangement of stars in the field containing each asteroid,
or take a photograph of the field. If you do this several times over the space of an hour or two, you
will be able to unambiguously identify the mover in each case. Good luck with the weather.