The transit of Mercury: how to observe it

(We have put together this tutorial with content from the BAA 2019 Handbook and from articles released previously by the Mercury & Venus and Solar Sections.)

A transit is a phenomenon that arises when a celestial body passes directly between a larger body and the observer. On Monday 11th November 2019, Mercury will transit the Sun as seen from Earth – a relatively rare event (the next is in 2032). For UK observers the transit will occur during the afternoon, with the transit still in progress at sunset. The geocentric contact timings can be seen in the following diagram: ingress occurs between 12:35 and 12:37 UT, greatest transit at 15:19 UT and egress occurs between 18:02 and 18:04 UT. Local timings are slightly different and a few are given in the following table. 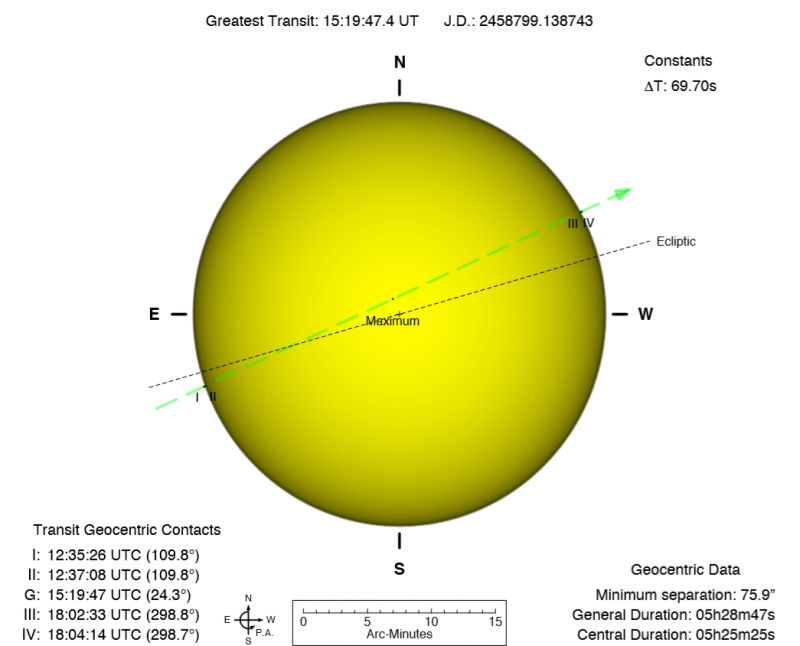 * Transit visibility ends with sunset. All times are UT.

SAFETY NOTICE. Remember you will be viewing the disc of the Sun, and take all the normal precautions. Observations should be made ONLY with a properly filtered telescope, or by projection. See the tutorial on solar observing written by the Solar Section Director Lyn Smith for much more information on observing the Sun – and how to do so safely: https://britastro.org/node/10604 .

Observing the transit, whether visually or via imaging in white light, H-alpha or CaK (usually imaging only) is very similar to that for sunspots or filaments/plage.  Given the small size of Mercury (10 arcseconds in diameter), the planet will not be visible to the protected naked eye, but it will be visible to those with properly filtered modest telescopes and moderate magnification. Observations that can be made include looking for the “black drop” effect which may occur at second contact, just as the planet’s disc enters fully onto the Sun. If the planet should happen to pass across a sunspot (a rarity at the moment), a drawings and images of that would be of interest. Those who possess H-alpha telescopes can try to detect the planet silhouetted against the chromospheric spicule layer before first contact.

When setting up to observe, be sure to check which is the eastern limb of the Sun, where the transit will begin, by some means such as allowing the Sun to drift across the field of view (with an undriven mount, objects drift westwards in the field of view – so if you have the sun centred, the eastern limb disappears last). Searching vainly for first contact on the western limb while the transit is already in progress is likely to prove annoying. If using eyepiece projection onto a piece of card or using a projection box, the eastern limb will be to the right (i.e. opposite to the diagram above). First and second contacts will occur at a position angle of 109.8 degrees. i.e. 20 degrees south of the eastern edge of the Sun’s limb. 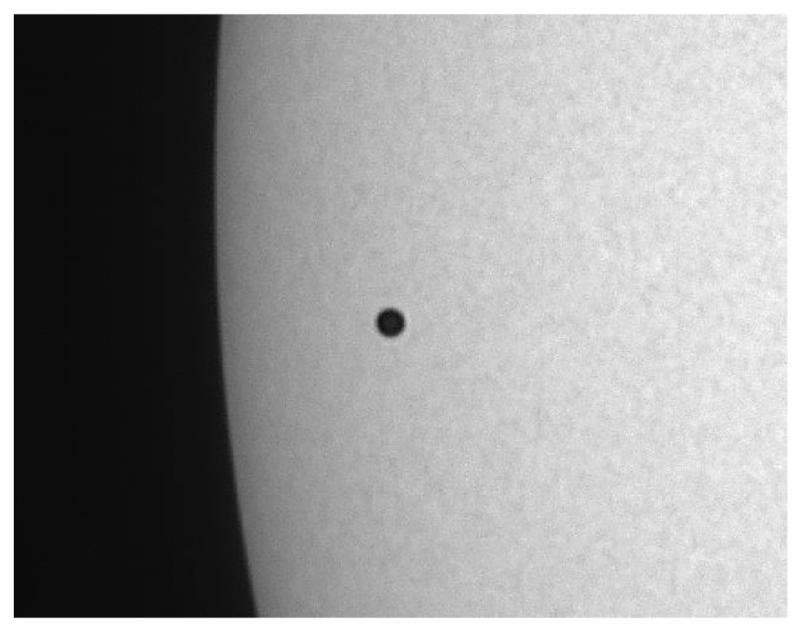 Images such as the one to the right (captured by Chris Hooker during the transit in May 2016) can be taken using a planetary camera attached to a filtered telescope, or with one of the modern “superzoom” cameras fitted with a suitable solar filter. The period of first and second contacts could be recorded as a short movie using similar equipment.

For high resolution work, the main consideration is to ensure the duration of any webcam AVI files used to generate a processed image is sufficiently short to avoid any detectable motion of Mercury. The motion of the planet across the solar disk is approximately 5.8” per minute or 0.1” per second. If the allowed motion to avoid blurring is say 10% of Mercury’s diameter this gives a maximum AVI imaging time of 10 seconds. Mercury may also be observed just before ingress in H-alpha, especially if the planet appears in front of a prominence.

Your observations should be submitted to the Mercury and Venus Section Director Paul Abel (paul.abel@yahoo.co.uk) and Mercury Coordinator Chris Hooker (chrishooker1@virginmedia.com) and the Solar Section Director Lyn Smith (solar@britastro.org). Image filenames should ideally be in the format MERCURY_YYYY-MM-DD_HHMMUT_FILTER_OBSVRNAME where FILTER is the name of any filter used (we suggest using WL for white light, Ha for H-alpha or Ca for CaK) and OBSVRNAME is your initials (unless a different identifier has already been allocated).

Because of the rarity of these transits, every effort should be made to observe the upcoming event. Clear skies!