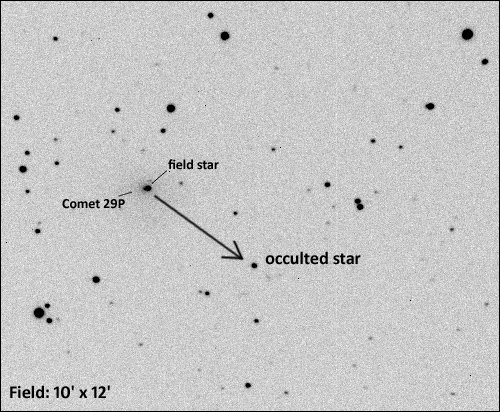 In the late evening of Tuesday 8th December 2020, the 64-km nucleus of Comet 29P/Schwassmann-Wachmann 1, along with its inner coma, are predicted to occult a 14th magnitude star in the constellation Aries as seen from Russia, Finland, Sweden, Norway, UK and Ireland. The star will be favourably placed high in the moonless sky as seen from the UK.

The path crosses Scotland about 23:24 UT and so in this case (and for other parts of the UK) the recommended observing window is 23:21 to 23:27 UT. For Sweden, the times will be about 1 minute earlier. The exact location may in practice move several hundred km away from the following path as the formal uncertainties are a significant underestimate of the potential shift in its position. 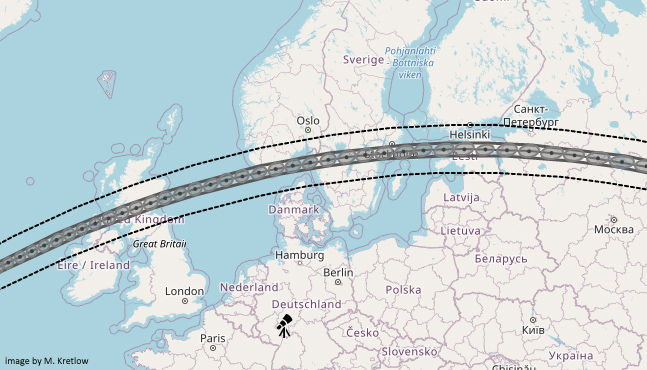 The position of the magnitude 14.7R star involved is R.A. 02h 18m 09.6s, Dec. +25° 19′ 05″.
The expected maximum duration of the occultation by the nucleus is 5.0 s but there is good reason to believe that secondary events involving a partial dimming of the star may also be seen if a debris disk or shell exists embedded within the inner coma. The most likely times for secondary events are within 60 seconds either side of closest approach. Similarly,
observations from locations up to 1000 km or so from the nominal shadow track may detect partial dimming of the star.

As far as I know, this event will be the first opportunity to probe the 29P system by the occultation method. Telescopes of 25-cm aperture or larger together with a sensitive integrating video camera are recommended. Alternatively if you wish to try using an integrating CCD or CMOS camera then the drift-scan method would be especially useful for detecting possible fades caused by debris shells or rings.

Importantly, 29P exhibits occasional strong outbursts and so the nucleus is usually embedded in a faint coma. Good seeing and good telescope focus will be important in detecting any changes in the intensity of the starlight throughout the long observing window. Its last strong outburst was on November 25th and the pseudonucleus has been fading since that time. If no further outbursts happen over the next 8 days then we should be in for a fairly unobstructed view of the pseudonucleus of the comet.

Josselin Desmars of the Lucky Star Team (https://lesia.obspm.fr/lucky-star/index.php) and Mike Kretlow of CORA (Collaborative Occultation Research on Asteroids) have independently generated predictions for this event. Thank you both!
Mike’s predictions are now available online, where you can click on the path dots and get information such as the predicted time in an info popup. See:
https://astro.kretlow.de/occpred/occ/342050/ (Mike’s latest)
https://astro.kretlow.de/occpred/occ/342021/ (JPL-H)

An article on the scope for studying comets and in particular 29P using the occultation method can be found on pp.11-13 of this 2018 issue of the Journal for Occultation Astronomy. 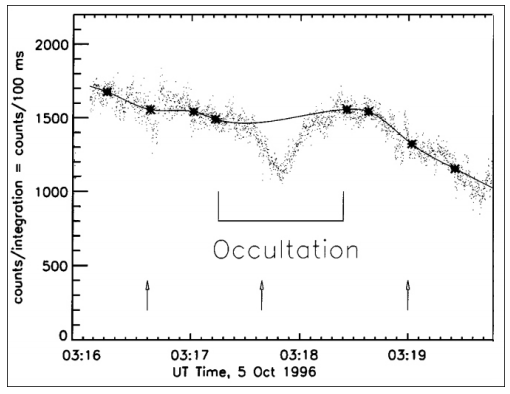 Positive event recorded by Yanga Fernández and Dennis Wellnitz in 1996
showing the occultation by the nucleus or near-nucleus region of comet Hale-Bopp
(adapted from Fernández, Y.R. et al. “The Inner Coma and Nucleus of Comet Hale–
Bopp: Results from a Stellar Occultation”. Icarus 140(1), 205 (1999))

Here’s a report I filed of a negative observation from Dorset, UK.

Most of northern Europe was clouded out for this rare event but observations
were possible from Dorset after the sky cleared minutes before the observing
window was due to open. A time-series of CCD images was taken +/-4 minutes
centred on the predicted time of the occultation.

My location was nominally 370 km from the centre of the JPL ephemeris track,
but more recent high-precision astrometry based on >550 images (mean
residual 0.09″) taken with the two 2.0-m Faulkes Telescopes over 12 years,
analysed by Mike Kretlow of CORA, indicated a shift in the track of some 470
km further northwards which means that the shadow probably missed my
location by ~800 km. N.B. The JPL ephemeris uses approx 24,000 observations
but many reports to the MPC are subject to measurement bias where outbursts
of the comet shift the photocentre away from the apparent position of the
nucleus. The high-precision astrometry avoids use of images taken soon after
such outbursts. 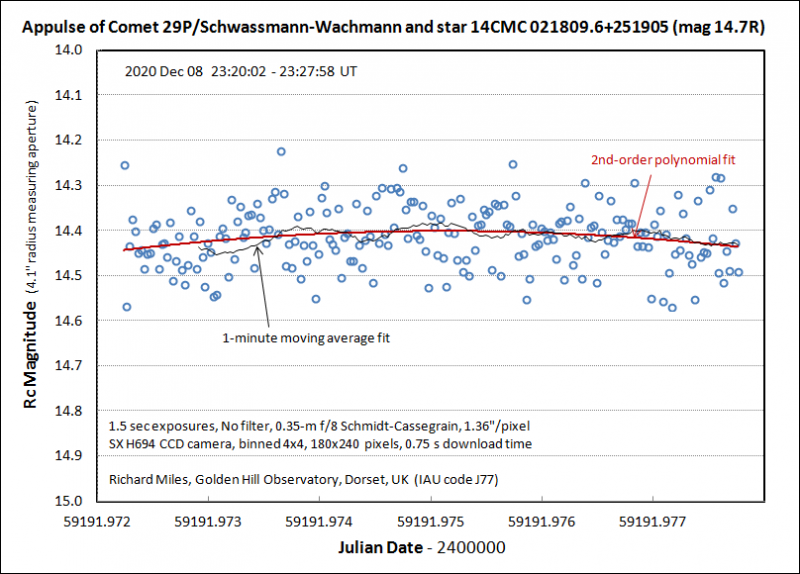 The lightcurve above shows no significant deviation of >15% on a 2.25-sec
time resolution (=27 km at the comet) that would be indicative of obscuring
matter along the line of sight of the star. A 1-minute moving average shows
no evidence for coma extinction greater than 1.5% in the region down to
about 800 km from the nucleus. The photometry uses weighted-mean zeropoints
based on 4 comparison stars as per this chart: 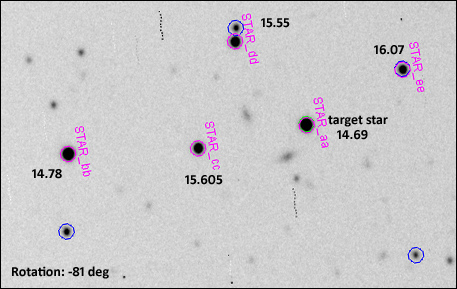