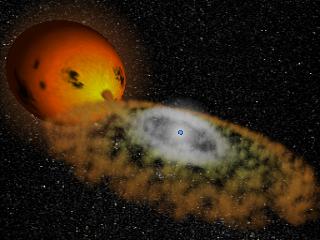 As announced in a recent BAA Alert email, the dwarf nova PQ And was found to be in outburst at mag 10.5 on May 28.776 by Kenji Hirosawa (Aichi, Japan). This means that it is some 9 magnitudes above its usual quiescence of 19.5. PQ And has only been seen in outburst once before when Dave McAdam discovered it as Nova And 1988. So this is its first appearance for 32 years.

Further details on PQ And and its current outburst can be found on the BAA VSS pages. There is also an active Forum thread on the subject.

All observations of this rare outburst are urgently required, both visual and CCD. Time resolved CCD photometry would also be very helpful. It’s of course tricky to observe given the location in the dawn sky, so every observation counts.

Dwarf novae are compact binary stars and as they evolve their orbital period gets shorter until it reaches a minimum around 75 to 80 minutes. The orbital period of PQ And is 80.6 mins. There is some speculation that this might be a rare example of a “period bouncer” in which the system has evolved through the minimum and is increasing.