The Geminids are currently the richest of the regular annual meteor showers, producing an abundance of bright meteors, with rates outstripping those of the August Perseids for a 24-hour interval centred on their maximum, December 13/14 – a real treat for observers prepared to brave the winter winds, cold and damp. 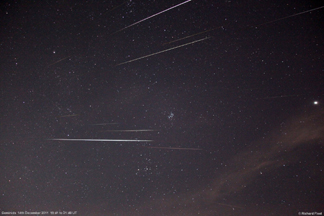 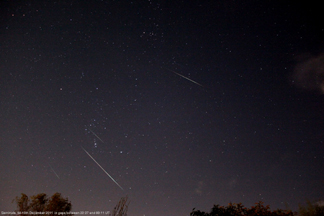 Active from December 6–17, but with a slow rise to maximum, the really good news this year is that the Geminid peak virtually coincides with New Moon, so there will be absolutely no interference by moonlight, enabling many fainter meteors to be seen in addition to the brightest members of the shower.  This year, peak Geminid activity is expected at about 20h UT on the early evening of Sunday, December 13, when the ZHR may reach 100 to 120 meteors per hour.

The Geminid shower radiant (at RA 07h 34m,  Dec +32.3o, just north of the first-magnitude star Castor) rises early in the evening and reaches a respectable elevation above the horizon (> 50o) well before midnight, so observers who are unable to stay up late can still contribute very useful watches. Even at 20h (the time of the peak on December 13) the radiant is already at an altitude of about 25o in the East-North-Eastern sky.

In recent years from the UK, the Geminids have shown typical peak observed rates of 70-80 meteors per hour in good skies. The maximum is quite broad, however, and respectable Geminid rates may be expected throughout the nights of December 11/12, 12/13 and 13/14.  This is over a weekend, which may be very convenient for many observers.

Past observations have shown that bright Geminids become more numerous some hours after the rates have peaked, a consequence of particle-sorting in the meteoroid stream.  This means that the early morning hours of Monday, 14th December are likely to yield the greatest Geminid activity for visual observers in the UK, when the radiant is highest in the sky.

As with any meteor shower, it is best to look at an altitude of 50o (about the same altitude as the Pole Star from southern parts of the UK) and 40-50o to either side of the shower radiant, rather than looking directly at the radiant itself, although Geminid meteors may appear in any part of the sky. December nights can be quite chilly, especially in the early morning hours, so wrap up well with plenty of layers of warm, dry clothing and make sure that you wear a hat, gloves, thick socks and sensible waterproof footwear.

Geminid meteors enter the atmosphere at a relatively slow 35 km/s, and thanks to their robust (presumably more rocky than dusty) nature they tend to last longer than most in luminous flight. Unlike swift Perseid or Orionid meteors, which last only a couple of tenths of a second, Geminids may be visible for a second or longer, sometimes appearing to fragment into a train of ‘blobs’. Their low speed and abundance of bright events makes the Geminids a prime target for imaging.

One surprising aspect of the Geminid shower is that it was unknown 200 years ago. Although there is evidence that the Geminids were active as early as December 1833, with further reports in 1836, the ‘official’ discovery of the shower was made by Robert Greg of Manchester in 1861 and the following year by Benjamin Marsh and Alex Twining from the USA. The shower has been recorded each year since that time, and observations by members of the BAA Meteor Section since 1890 have indicated steadily increasing activity. The peak Zenithal Hourly Rate (ZHR = the number of meteors a single observer would see in an hour under very clear, dark skies with the radiant at the zenith) was typically 20-60 meteors per hour in the early twentieth century, rising to 80 meteors per hour by the 1980s. In recent years, the peak ZHR has usually exceeded 100 meteors per hour, even approaching 120 meteors per hour (two meteors per minute) on several occasions.

The majority of the annual meteor showers are associated with known periodic comets, yet there is no very short period comet that matches the orbit of the Geminid meteoroid stream. Instead, the orbit of the Geminids is occupied by an object called 3200 Phaethon, which looks remarkably like a rocky asteroid. It was discovered in 1983 by British astronomers Simon Green and John Davies whilst searching images from NASA’s IRAS satellite. The problem was that 3200 Phaethon appeared to shed very little dusty debris – not nearly enough to explain the amount of material in the Geminid stream. However, the eccentric orbit of 3200 Phaethon brings it well inside the orbit of Mercury every 1.43 years. The rocky body consequently receives a regular blast of solar heating that might somehow trigger the release of dust to enrich the Geminid stream.

To test whether this might be the answer, a group of astronomers led by David Jewitt and Jing Ki of UCLA used NASA’s STEREO-A spacecraft to take a closer look at 3200 Phaethon when it passed closest to the Sun in June 2009. The resulting photometry showed a doubling of Phaethon’s brightness as it approached the Sun, as if sunlight were shining through a cloud of dust around the asteroid. The observers began to suspect 3200 Phaethon was something new – a “rock comet” which is, essentially, an asteroid that approaches so close to the Sun that solar heating vaporises relatively involatile material, the gas formed lifting dusty debris right off its surface and forming a tail of rocky grains. Seeing 3200 Phaethon sprout a tail, even a small one, provides some confidence that Phaethon is indeed the source of the Geminids, but a major problem remains: the amount of dust 3200 Phaethon ejected during its 2009 Sun-encounter added a mere 0.01 per cent to the mass of the Geminid stream – not nearly enough to keep the stream replenished over time. Perhaps the rock comet was more active in the past? Only time and further continued observations may provide an answer.

The BAA’s visual meteor report forms, available as downloads in both pdf and here in Excel format, enable observers to record the details of each meteor seen. These include: time of appearance (UT); apparent magnitude (brightness); type (shower member, or random, ‘background’ sporadic); constellation in which seen; presence and duration of any persistent train. Other notes may mention flaring or fragmentation in flight, or marked colour. Watches should ideally be of an hour’s duration or longer (in multiples of 30 minutes). Observers are reminded to carefully record the observing conditions and the stellar limiting magnitude. Wrap up warmly and enjoy what should be a great show!