BAA Observers’ Challenge: Occultation of a star by Saturn and its rings on 2021 June 27/28

Occultations of stars by Saturn and its rings are rare, but such an event is predicted to occur on the night of June 27/28. Occultations have been observed in the past and one such observation, made in 1917 February 9, turned out to be historic. On this night, two BAA members, Captain M. J. Ainslie and J. Knight observed the occultation of the star BD +21° 1714 by Saturn’s ring A. Using a 9 inch Newtonian and 5 inch refractor respectively, they found that this 7th magnitude star was visible through Ring A but at a reduced brightness. Further the star appeared to return to almost full brightness when observed through the Cassini division. These observations showed ring A to be translucent and also indicated that the Cassini Division was a true gap in the rings. 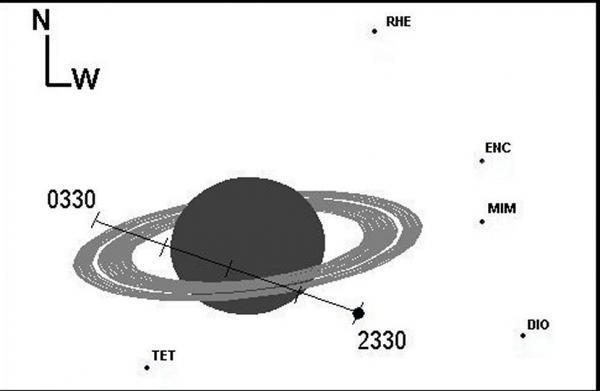 The occultation on June 27/28 will however be much more challenging for a number of reasons. Firstly the star itself, TYC-6349-00492-1, is of only magnitude 10.2 which is comparable to the magnitudes of satellites Tethys and Dione. Further, the Moon, a few days past full, will lie to the east of Saturn and twilight will present at the end of the occultation. Finally atmospheric extinction will have an effect, due to the low altitude of the planet from UK latitudes.

The predicted track of the star relative to Saturn is shown on page 57 of the BAA Handbook and is reproduced here. This diagram was prepared by Edwin Goffin and reproduced with permission of the Computing Section director, Steve Harvey. The positions of the star are shown at 23:30 UT and 03:30 UT.

In a private communication, Steve has confirmed that the exact times of the occultation by both the planet and the rings are very uncertain. I have used the Stellarium software which indicates that the occulation at the p. limb of the planet may occur at approximately 00:20 UT and reappearance at the f. limb may occur at approximately 02:10 UT but these times are very uncertain. Given this uncertainty it is best to monitor the planet within the time window shown in the diagram.

The detection of this star, close to either the planet or the rings, will be difficult due to the star’s magnitude. The use of an occulting bar in the eyepiece may help hide parts of the planet and rings and hence reduce the surrounding glare. In the past, visual observers with large telescopes or those using imaging have been able to detect both Tethys and Dione close to the limb of the planet when these satellites have been entering or leaving transit. However this was during a period when the rings were close to edge-on, and thus their glare was reduced.

If anyone observes this challenging occultation event or just detects the star close to the planet or rings, please send your observation to the Saturn, Uranus and Neptune section and post the observations on the BAA observers’ page.