Mercury is the innermost planet of our Solar System, and the smallest of the true planets, with a diameter of about 4880 km. The name Mercury (Latin Mercurius) is the Roman equivalent of the Greek god Hermes, the winged messenger of the gods. For a time the planet was actually known as Hermes, and even today the adjective Hermean is sometimes used in connection with Mercury. It is one of the five planets readily visible to the naked eye, and has been known since ancient times.

Mercury’s average distance from the Sun is 58 million kilometres, about one-third that of the Earth, but its orbit is less circular than the other planets, so its distance from the Sun ranges from 46.3 to 70.3 million kilometres. Mercury’s orbit lies inside that of Venus, which means it can never be seen opposite the Sun in the sky, and in fact Mercury never appears more than 28 degrees from the Sun as seen from Earth.
Mercury orbits the Sun in 88 days, and for a long time, astronomers believed that it rotated in the same time, in other words that it kept the same face towards the Sun, as the Moon does to the Earth. Features that could be seen on the surface when Mercury was observable appeared to confirm this. However, in 1965 a series of radar observations showed that in fact Mercury’s rotation period is 58.6 days, exactly two-thirds of its orbital period. Mercury’s rotation is indeed locked to its orbit, but in a ratio of 3 rotations to 2 orbits, rather than 1:1. This is known as an orbital resonance.
This relationship between Mercury’s rotation and its orbital motion has the interesting consequence that at some locations on the planet there are double sunrises and sunsets, and at other places the Sun appears to stop and move backwards in the sky before stopping again and resuming its normal motion.

Structure and surface of Mercury

Mercury’s mass was first worked out in the 1890s by the mathematician Simon Newcomb, who analysed how Mercury affected the orbits of several comets (including comet 2P/Encke) which pass through the inner Solar System. The mass was larger than expected, and combined with Mercury’s small size implied a high density similar to that of the Earth. A far more accurate measurement was obtained from the planet’s effect on the path of the Mariner 10 spacecraft during its flybys, and this confirmed that Mercury is unusually dense for a body of its size.

Mariner 10 also detected a significant magnetic field around Mercury, which was surprising. The conclusion is that Mercury has a large core of either pure iron or iron combined with sulphur, making up almost 70% of the planet’s mass, a far greater proportion than any other known planet. The core is about 3600 km in diameter, and it is overlaid by a rocky layer some 640 km thick. 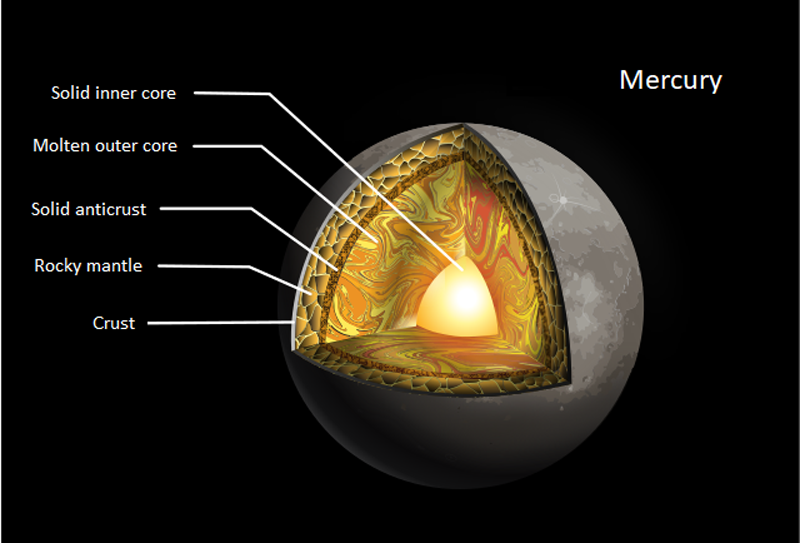 Almost everything we know about Mercury has come from the two spacecraft to visit the planet: Mariner 10 and Messenger. Mariner 10 made three flybys of Mercury in 1974 and 1975, obtaining images of about 50% of its surface and collecting a great deal of other data about its mass, magnetic field, surface composition and close-in environment. Messenger was launched on 3rd August 2004 and had its first encounter with Mercury on 14th January 2008. After two more flybys, Messenger arrived in orbit around Mercury on 18th March 2011, and spent just over four years collecting data. It was finally de-orbited and crashed into Mercury on 30th April 2015.

The spacecraft images, of which Figure 3 is an example, show a heavily cratered surface with several multi-ring impact basins, and bright patches with rays of ejected material near some of the impact points. The images also show some smoother areas between craters that are believed to have resulted from lava flows from the interior. However, Mercury has no large lava plains or maria like the ones we see on the Moon. As with the Moon, colour on Mercury is subtle and barely visible.

One very large impact feature, the Caloris basin, is 1300 km in diameter, and has multiple concentric rings and many other associated features. On the exact opposite side of Mercury from Caloris is a region of very irregular terrain where the surface has been broken into a jumble of hills separated by straight valleys. Computer models suggest that this was caused by the shock waves from the Caloris impact, which were focused and concentrated through Mercury’s core to magnify the effect.

Another unusual set of features on Mercury is a number of winding ridges, a few being over 500 km long. These have the appearance of compression faults, in which part of the surface has moved up and across the neighbouring part. However, there are hardly any examples of tension faults, where a piece of crust has sunk down below its surroundings. This evidence strongly suggests that Mercury has shrunk slightly since it was formed, causing its outer layers to be compressed, which may be due to the contraction of its core as it cooled.

The next probe to reach Mercury will be the BepiColombo spacecraft, a joint mission between the European and Japanese space agencies. It was launched in October 2018 and will enter orbit around Mercury early in December 2025. The mission comprises two separate orbiters which will enter different orbits to perform the most comprehensive study of Mercury ever undertaken.

Mercury has no moons, nor does it have an atmosphere, although there is evidence that it is surrounded by an extremely thin cloud of volatile material that has been blown off the surface rocks by the impact of interplanetary dust particles and bombardment by protons in the solar wind. This exosphere consists of relatively light elements such as hydrogen, helium, oxygen, sodium, potassium and calcium. The pressure of the solar wind drives the material away from Mercury to form a tail extending in the anti-solar direction, like the tail of a comet. The tail is too faint to see by eye, but has been recorded in ground-based images taken in the yellow light of sodium.

Mercury’s axial tilt (the angle between its rotation axis and the perpendicular to its orbital plane) is only 2 minutes of arc, which is very small. There are thus no seasons on Mercury, when one or other pole faces more towards the Sun, as occurs on Earth. The small axial tilt means there are regions inside craters near the poles that are in permanent darkness, and because there is no atmosphere to transfer heat from other parts of the surface, temperatures in the shaded regions are around -170° Celsius. The dayside of Mercury can reach 450° Celsius which, in spite of Mercury’s proximity to the Sun, is still not as hot as the surface of Venus (typically 465° Celsius).

Radar observations have detected deposits of highly reflecting material, believed to be water ice, on the floors of some of the polar craters and this finding was later confirmed by data from the orbiting Messenger spacecraft. The water may have come either from collisions of comets with the planet, or by outgassing from Mercury’s interior. A fraction of the water released in these ways would migrate to the poles and condense in the cold regions, where it remains to this day.

The principal phenomena of Mercury are its superior and inferior conjunctions, when it passes behind the Sun or between the Sun and the Earth, and its eastern and western elongations, when it appears furthest from the Sun in the sky and is easiest to see. At conjunctions Mercury cannot be seen, except on the relatively rare occasions when it passes exactly between us and the Sun, and we see it in silhouette as it makes a transit across the Sun’s disc. The next transit of Mercury will occur on 13th November 2032, and all but the start of it will be visible from the UK, weather permitting.

The only times when Mercury can be seen with the naked eye are in the twilight before sunrise or after sunset, or during a total solar eclipse. Its orbit is tilted by 7 degrees relative to Earth’s orbit, and this, combined with the eccentricity, greatly affects its visibility. Some elongations of Mercury are favourable for observers in the northern hemisphere, and others for those in the south. A rule of thumb (for either hemisphere) is that eastern elongations are best seen on spring evenings and western elongations on autumn mornings. The best way to find when Mercury will be easy to see is to use a planetarium program such as Stellarium, which will give the kind of views shown in Figure 4. Other similar apps are available, and the BAA Handbook lists the elongation and sky coordinates of Mercury at 5-day intervals, along with its brightness and apparent diameter.

A third factor affecting Mercury’s visibility is the planet’s phase. Mercury shows a complete range of phases from crescent to full disc, just as Venus and the Moon do. Unlike Venus, however, Mercury does not remain at a very similar brightness as its phase changes. Mercury’s rocky surface is similar to the Moon’s, and far less reflective than the clouds of Venus. At full phase Mercury is on the far side of the Sun and is unobservable, although its brightness can exceed magnitude -2. At maximum elongations it shows approximately a half-disc, and its magnitude can vary from -0.5 to +0.4, which is relatively faint. This is partly offset by its rising earlier or setting later, and thus being visible in a darker sky. It is often described as having a pinkish tinge, but can easily be mistaken for a star.

The apparent diameter of Mercury is typically between 5 and 8 arc seconds, making it a tricky subject for amateur study. A modest telescope will show the phase of the disc. Picking out surface markings requires an aperture of 20 cm or more, and the most that can be seen is variations in surface brightness, with light spots or patches corresponding to deposits of ejected material around the larger impact craters. Figure 5 shows some examples of what can be seen and imaged. For those who wish to try observing the planet, there is an Observing Guide which BAA members can download from the web-page of the Mercury & Venus Section.

Mercury’s small size, and its proximity to the Sun, make it a tricky object to see, and many amateurs are satisfied with just a glimpse of this little world in the twilight sky. The extreme conditions on its surface mean that humans will probably never visit the planet, but will leave exploration to robotic probes. Understanding more about Mercury, though, may give insights into other planetary systems in which exoplanets, some larger than Jupiter, orbit closer to their star than Mercury does.