Update on March 9 – A large strewn field of meteorites has been found around the town of Winchcombe. See the NHM press release here.

Last night (February 28) many people saw a bright fragmenting fireball crossing the sky at around 2154 UTC. I picked it up on my NEMETODE camera in Chelmsford (video here) and it was also recorded on multiple camera systems across the country, including the UKMON cameras run by Richard Fleet at Wilcot. Members will remember that Jim Rowe and Ashley King gave a recent BAA webinar on the possibility of recovering a meteorite fall based on camera imaging (Youtube video here). It turns out that this fireball may be the first test of the UKFall system since analysis of the data indicates a good possibility that this event led to a meteorite fall somewhere to the east of Cheltenham.

On behalf of UKFall, Jim writes:

Last night’s spectacular yellow-green fireball was caused by a piece of a asteroid entering the earth’s atmosphere, according to scientists from the UK Fireball Alliance (UKFAll). The fireball or meteor sent a sonic boom across southern England and is set to break the world’s record as the most-reported-ever meteor on the International Meteor Organisation’s website with 758 reports so far.  Seen at 9:54pm on Sunday night, it was observed from as far away as Ireland and the Netherlands and recorded on at least six specialised UKFAll fireball cameras.

Dr Luke Daly of the University of Glasgow and UKFAll said “this meteor fragmented a lot, as you can see in the videos. Most of the meteoroid vapourised during the six seconds of visible flight.  However, with this one we think quite a few fragments probably reached the ground”.   He continued “if pieces landed, they are likely to have been on or just north of Cheltenham, out towards Stow-on-the-Wold.  So most pieces are likely to be on farm land”.

Advice from Dr Katherine Joy of the University of Manchester is – “if you do find a meteorite on the ground, ideally photograph it in place, note the location using your phone GPS, don’t touch it with a magnet, and, if you can, avoid touching it with your hands.  Pick it up in a clean bag or clean aluminium foil if possible!”

UKFAll asked people not to breach COVID-19 lockdown restrictions to look for the meteorite.  “If you find a piece on your farm or a road, please let us know.  But don’t go hunting for it.”

Dr Ashley King of the Natural History Museum and UKFAll said “the video recordings tell us its speed was about 13 km/s which is too fast for it to be human-made ‘space junk’, so it’s not an old rocket or satellite.  The videos also allowed us to reconstruct its original orbit around the sun.  In this case, the orbit was like an asteroid’s.  This particular piece of asteroid spent most of its orbit between Mars and Jupiter, though sometimes got closer to the Sun than Earth is.”

UKFAll has more than thirty cameras in the UK continually monitoring the sky for meteors and fireballs, and this event was picked up on six of them, at Cardiff, Manchester, Honiton, Lincoln, Cambridge and Welwyn Garden City.  It was also picked up by the NEMETODE meteor network in Chelmsford.  Working with Australia’s Desert Fireball Network and France’s FRIPON network, UKFAll analysed the meteor’s path through the sky, and continuing to refine the likely exact location of meteorite falls.

Dr Sarah McMullan of UKFAll estimates that about 50 tonnes of extra-terrestrial material enters Earth’s atmosphere each year. She says that “Most are sand-sized particles known as cosmic dust, including the most meteors in the Perseid meteor shower that takes place every August.  But even over a relatively small land area like the UK, about twenty meteorites probably land each year. Most are barely the size of a sugar cube. However, two or three are bigger, and that’s probably the case with this one.  Every few years a much bigger one will arrive”.

If you have any observations of this event please submit them to the Meteor Section. 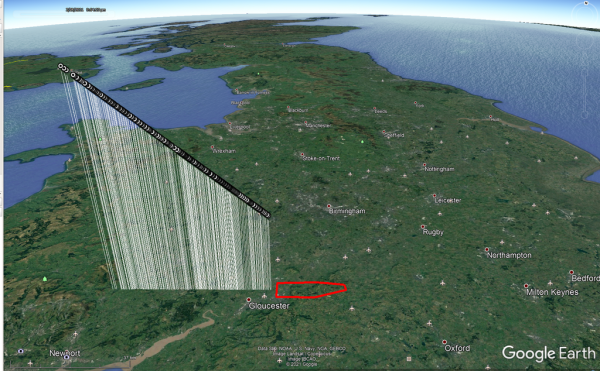 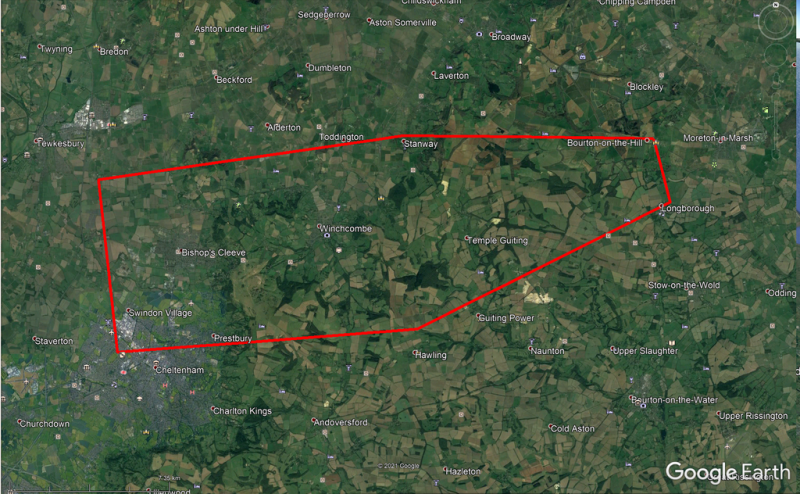