On the 9th February just after 11:00UT the Moon occults (passes in front of) Dwarf Planet 1 Ceres which is the largest body in the asteroid belt between Mars and Jupiter. The occultation in full can only be observed from the Seychelles, with the path extending to Sri Lanka, parts of southern China and ending in Japan. By the time the Sun sets in the UK at 17:04UT, the Moon and Ceres are around 5 degrees apart midway between the Pleiades and the Hyades in Taurus at a respectable altitude of 58 degrees.

Ceres was discovered on 1st January 1801 by Giuseppe Piazzi but the first recorded lunar occultation of Ceres wasn’t until 1973 and then again in 2014. Neither of these events were visible from the UK.

The Sun will set at 17:04UT in the constellation of Capricorn. 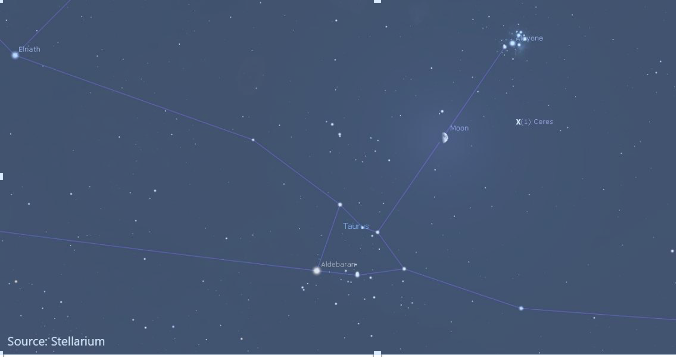 The challenge is;
1/ Identify Ceres in a crowded star field.
2/ How soon after sunset can you observe Ceres?
3/ For imagers, can you get the Moon, Ceres and the Pleiades together in the same picture?

Depending on sky conditions it should be possible to pick Ceres up in a pair of binoculars. The apparent angular diameter will be 00.57 arc seconds, so essentially a pin point of light and at magnitude 8.5 below naked eye visibility. Identifying Ceres by observing the area over the preceding nights will show it move against the background stars. Below is the position of Ceres for the 5th-9th February.