I’m continuing to monitor it visually, and my last observation was Apr 25.98 UT at 14.2 so it’s fading gradually now.

Very probably the magnitude will drop quickly once it gets just below 15ish, but this might not be the end of the outburst.  UGWZ stars very often (but not always) have ‘echo’ outbursts or rebrightenings.  AL Com has a history of this.  Since 1995, three of the outbursts detected have showed this phenomenon, but the 1995 one was the best.  It was the first outburst of AL Com observed with the ‘new’ CCD’s, and showed two rebrightenings after the primary outburst had finished.  One rebrightening was seen in each of the 2013 and 2015 outbursts.

The light curve shown here is of the 1995 outburst, and was compiled by me during my BAAVSS directorship from observations from observers around the world.  The two post outburst events can be seen clearly.

So, if your following AL Com at the moment and you lose it either visually or with your CCD, continue to monitor for a couple of weeks longer.  There is no guarantee it will brighten again but it just might… 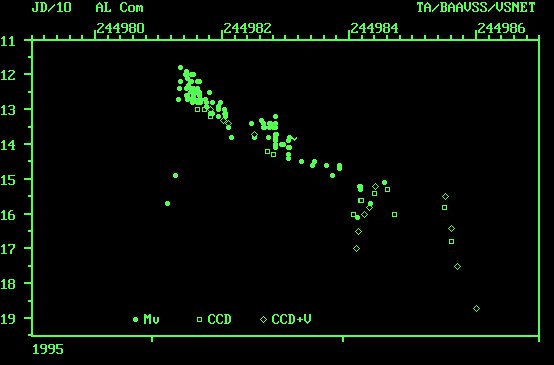