An interesting development that only spectroscopy can reveal an insight into…

(Or possibly throw a red herring!)

I received a tweet from another observer (JS) enquiring as to the possibility of this particular fireball being a Southern Taurid.

Initially I said no because the observations by the NEMETODE members had indicated a sporadic but the elements had some similarities. I remembered that last year around the same time I had caught another fireball that I was confident was a STA but didn’t have any orbital data.

I dug out the image and plotted the spectrum, then overlaid the spectrum of this years “sporadic”.  Apart from some minor lines that may or may not be real, the bulk spectrum signatures are essentially identical! I found this to be both an impressive correlation and an intruiging result! 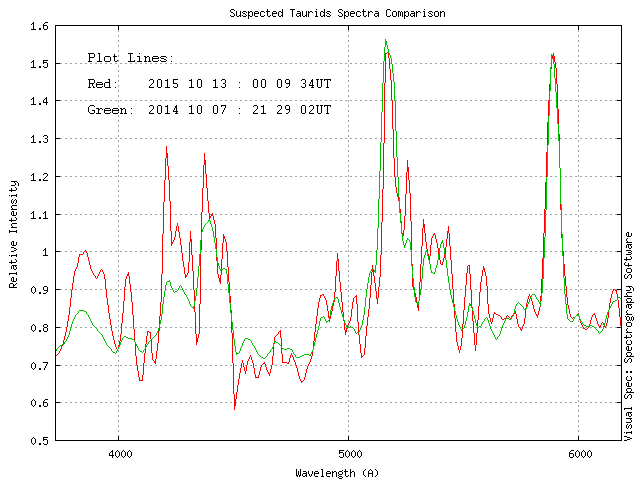 So what is the truth?, difficult to say but in the first instance the evidence point to the two meteoroids being made of the same stuff. JS had caught a still image with the fireball of this year and it certainly tracks back to the general region of the STA radiant despite not matching exactly (by UFO). Perhaps this one is a little bit of Comet Encke that’s been perturbed gravitationally (by Jupiter) or has been ejected with such a velocity that it has evolved into a slightly different orbit.

No matter, through spectroscopy, the evidence of the compositional similarity is very good.