I’m always wary of the idea that making naked eye observations of variable stars is *still* a good way of introducing beginners.

Although several, such as delta Cephei, are visible with the naked eye from many locations in the UK, to make an accurate observation requires both the variable and comparison to be *easily* visible. Given that delta Cephei goes down to about mag 4.3 means that you need a limiting magnitude approaching 5.5. Personally, despite my observing site more or less achieving this in moonless skies, I find it easier to observe delta Cep using smaller binocular sizes nowadays.

Given that visual observations inevitably “jump around” a bit, especially for inexperienced observers, one thing that is needed is persistence – as it can take many observations before the saw-tooth pattern emerges from the “scatter”. The accompanying light curve shows SPA VSS observations of delta Cephei from 2017.

Fortunately nowadays, PC software makes the plotting of light curves a lot easier – no “folding” of light curves is required. The SPA VSS has a spreadsheet that can be downloaded: http://www.popastro.com/documents/DeltaCephei_phase_calc_blank.xlsx

You enter the dates, times and magnitudes. It then does the conversions and plots the phase-based light curve for you. 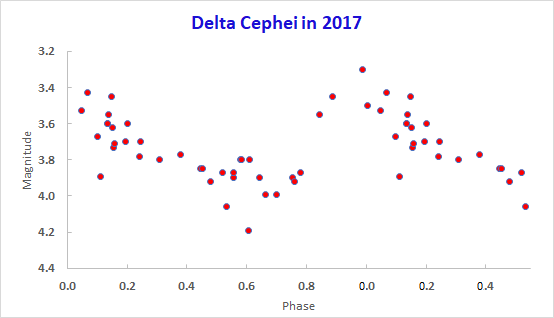