Here is a spectrum of comet 46P taken last night Dec 9.908 with a LISA spectrograph on a C11. Total exposure time was 3000 sec. The spectrum was integrated in the Y direction over 27 arcsec on the sky which is approximately 3x the FWHM of the bright central region of the spectrum. Sky subtraction regions were approx 3 arcmin away for the comet so although they will contain some light from the coma this is relatively faint at that distance and so should not significantly reduce the intensity of the central spectrum. 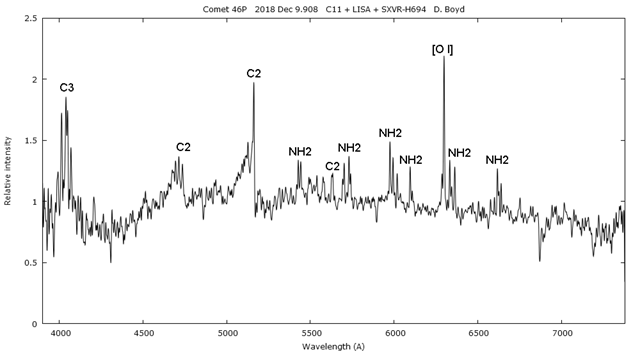 I have tentatively identified the most prominent lines using the table in Brown et al., Astronomical Journal, 112, 1197-1202 (1996). Although there is also an emission line from NH2 at 6300A, most references appear to attribute the very bright line at that wavelength to [O I].