And so you shall Grant! But firstly, herewith some responses and information from Roger on the comments in your previous post.

I will of course accept your statement that an “uncooled Lodestar” will get down to mag. 12/13. However …. you didn’t say which Lodestar you had in mind but the cheapest device with “Lodestar” in its title which Google could find me was a second-hand Starlight Xpress Lodestar Usb2 Mono St4 Guide Camera (catchy title!) on eBay for £245. Next best was £469 and then it got silly. As mentioned in connection with the similar suggestions from Jeremy, Tim & Andy, even £245 is probably a good percentage of what a beginner might have paid for their entire set-up so a device of this sort is not going to be high on their “must buy” list. The same is true for tripods of course. An EQ6 is no doubt a fine piece of kit, but with a price running potentially into 4 figures it’s not really a budget offering! When one is working with more basic, less highly specified, equipment and a desire to be more frugal, different solutions are needed.

So, to cut to the chase, of what does Roger’s finder consist? Camera first. It’s actually a ZWO ASI 034MC webcam, “bought used on eBay some years ago for £30” and obsolete now, of course. This is mounted at the eyepiece end of a basic 6×30 optical finder by use of an array of metalwork and adapters, including an internal focus tube using a webcam lens bought from China to allow the ZWO to image afocally. Total cost? Less than £50. Clearly neither practical nor desirable to make an exact copy were it to be manufactured, but Roger estimates that a “proper” version could be made for £100 all in and ready to mount & use.

Now performance. Its field of view is in excess of 6 degrees and stars down to at least mag. 8 can be clearly imaged with even field illumination and very little distortion. Just right for visual identification of direction of view when star-hopping in fact, obviating the need for potentially troublesome plate solving and therefore for an accurately adjusted and calibrated tripod.

And finally a picture. Please bear in mid that this is a test image taken when the device was undergoing development, so it is neither quite centred nor in the correct orientation (needs rotation by 105 degrees anti-clockwise for “sky equivalence”). Roger hasn’t needed to take any such images when using the finalised version for actual observations, as it works so well, so I can’t post any. But this one is an unprocessed single frame, exactly as taken – just reduced in size for ease of posting. 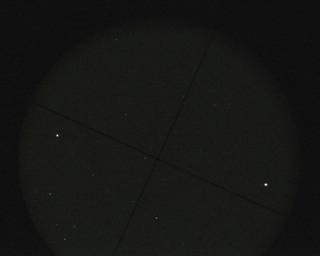 This image has been chosen to show that the FoV is indeed around 6 degrees – the brightest stars are Merak (left) and Dubhe (right) which are separated by 5 deg 22.43 min. It can be seen that the star images are circular right to the edge of the frame and free of false colour, and there is uniform field brightness.

A pretty useful piece of kit, I would say, and at a potentially very attractive price. Any budding entrepreneur care to change their mind as to manufacturing possibilities before it’s snapped up by the PRC?