Sorry Grant but you do seem to be persistently mis-understanding (or mis-construing) many of the points being made here. As I clearly said in the text of my post, the image I attached was chosen mainly to prove that the “electronic finderscope” did indeed have a uniform, undistorted, FoV of around 6 degrees – twelve times greater than that of the set-up you mention and therefore of much geater use as a finder – not to illustrate that it could capture 2nd magnitude stars. In fact, by looking only a little more carefully at the image (helped perhaps by an expansion of the page in the browser), one can clearly make out very much fainter stars – down to at least 8th magnitude in fact, as claimed in the post. I admit that the need to reduce the image for convenient display in the post has made this slightly less convenient so here’s a larger view of just the bottom-left corner which has been enhanced so as to make things even easier. 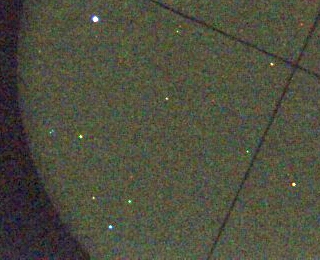 As you will be able to confirm, the star visible towards the edge of the frame 45deg down and left of Merak is magnitude 8.38, that to Merak’s right (just below the cross-hair) is mag. 7.94, and there are several more stars visible of somewhat greater brightness. This number of stars of that range of magnitudes in a FoV of this size makes it very easy for an almost real-time assessment of the direction of view to be made by comparison with whatever star chart or program one is using to carry out the hopping process. This ease of  “manual plate solving”, if you will, makes consulting astrometry.net entirely un-necessary.

And don’t forget that this is just the image through the finder. Once the target (or the field in which the target is known to sit, for very faint objects) has been located and centred in the wide FoV of the finder, attention can turn to the greater light-gathering power and magnification (but also very narrow FoV) of the main instrument in order to make observations. This is far simpler and much faster than carrying out both the alignment and observation operations through the main instrument, especially for a beginner for whom, as I must seemingly keep on reminding everyone, this device is intended.