The AAVSO thread is correct that the main problem here is the lumpy background of the galaxy. A uniform background would be fine since you could estimate it in the same way you do the sky and then subtract it from the measured counts. A lumpy background is much more difficult to handle and while using a small photometric aperture helps to a certain extent there is only so small you can go. As the thread says, the only real solution is to find a way to subtract the galaxy. I’ve been doing this using some IRAF routines to synthesise an SN-free galaxy but these are not particularly user friendly and IRAF is Unix/Linux based and so not widely available to amateurs. I wonder if people have any ideas for Windows based ways of doing this? This is becoming significant now as the SN fades.

The graph below shows the problem. It shows cuts through the SN (about 13.0V) normal and parallel to M82’s plane and a cut through one of the comp stars (13.4V). The pixel values are sky subtracted. The comp star is well away from the galaxy but the SN is in it and lies on a very lumpy background that will distort the counts. 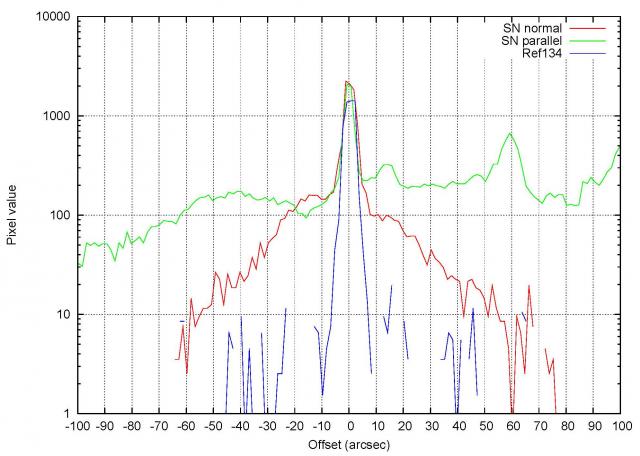