The measurements pre 1997 were all based on the light curves which are indeed tricky to estimate the mid eclipse point from due to the continuing  brightness variability of the red giant throughout the eclipse seen in the AAVSO data in fig 5 of Hugh’s paper.  The photometry and spectroscopy were in good agreement within 7 days in 1998 though.

I have extracted  B-V  from the AAVSO data which is less influenced by brightness variations than using using V I think. I have marked Hugh’s spectroscopic mid eclipse and  the expected values based both on the earlier ephemeris and assuming a 60 day increase in period post 1978. 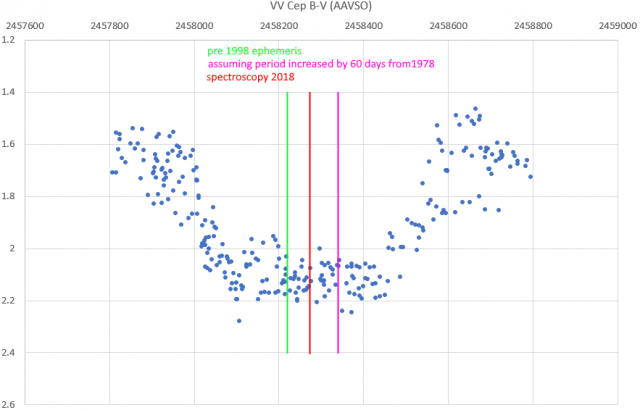 Hugh’s value agrees well with the B-V data. The prediction based on a permanent increase in period is clearly not compatible  with the current data but perhaps there is enough wriggle room to say that the original ephemeris is ok and the 1997-1998 eclipse data (both spectroscopic and photometric) was anomalous for some reason?