Hi Nick,Thanks for the kind words. I’m not sure that I’m best placed to give a detailed comparison as the ASA DDM60 Pro is my first grown up mount, previously only having owned a cheap and cheerful motorised equatorial. Mechanically, as you have read, the ASA mount is an absolute delight and is just light enough that I can manoeuvre it on and off the pier: 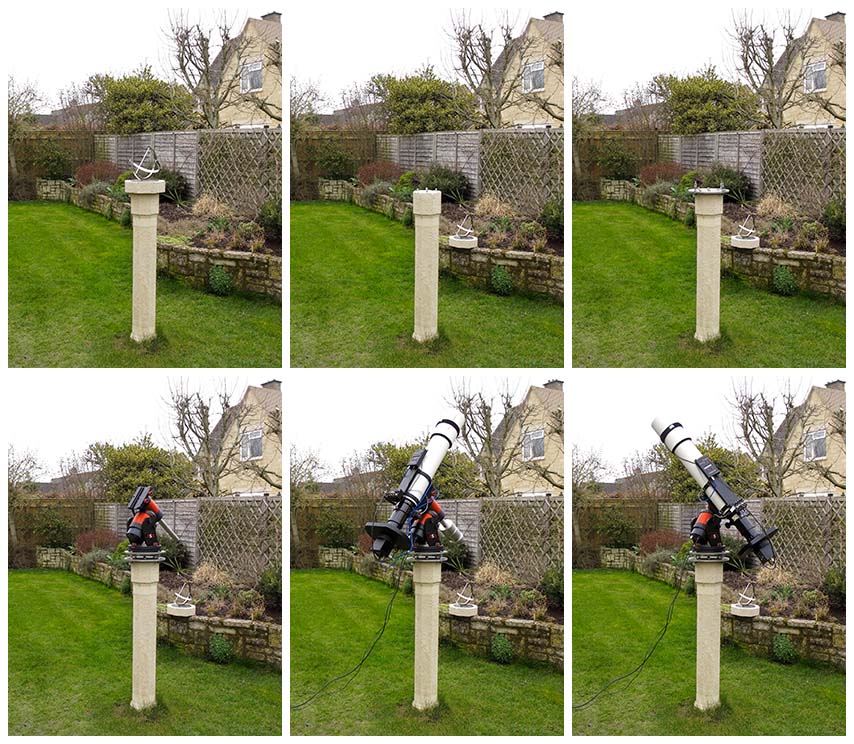 As I understand it, earlier versions of the control software needed a deal of manual fine tuning of the three parameters used to control the motor power and responsiveness but that situation is much improved now. Even so I did have to tweak one setting a little after the automatic calibration routine (the software wobbles the mounting separately on the two axes in order to sense the moment of inertia of whatever is attached) as I was hearing some noise as the mounting slewed – it is normally completely silent! The manual gave me enough extra information to do this quite easily.When first installed the mounting allows a rough polar alignment in the northern hemisphere via use of a built in laser. That was good enough for me to mark out and drill the last few holes for the bolts which tie the mounting to the top stainless steel disk. The two stainless steel disks that you can see in the picture above and which couple the mount to the pier were bought separately from a laser cutting firm in the UK and had all the holes for the M12 bolts which hold the bottom plate to the pier and tie the two plates together accurately cut. The next task was to use the supplied Autoslew software to fine tune polar alignment. This is an iterative process where one commands Autoslew (I used third party planetarium software to do this) to point at a star and then nudge the pointing via Autoslew’s software control until the star is centred (using cross-hairs or, better still, a camera for pixel perfection) and then tell the software it is centred. Do this for three stars and then tell the software to do some sums. Then tell the software to point at the first star (should be near the meridian at about 45° elevation and apply it’s calculated polar alignment error. Then it’s a matter of adjusting the mounting screws to mechanically recentre the star. This procedure is repeated a few times until alignment is complete. With practice this could be done on the road with a tripod but I haven’t tried it.There is one further critical step for long exposure unguided astrophotography and that is to train the software to compensate for any residual pointing errors due to polar alignment (obviously can’t compensate for field rotation!), mechanical flexure or atmospheric refraction. That took me the best part of an evening to do as it requires pointing at a selection of stars all over the sky. By the way, it is perfectly feasible to use guided tracking with the DDM60.It all sounds complicated and the steep learning curve (for me, at least) isn’t helped by the manual’s general discoursive style. All the information is there but a check-list of steps to perform would have been useful. That said, the effort was totally worth it and I’m haven’t had to retrain since my TEC 140 was delivered in the Spring. An observing session starts with me assembling the kit on the pier. The holes in the stainless steel plates were laser cut to a fine tolerance so once I power up all I have to do is tell the software to find the internal calibration marks on the high resolution encoders on each axis. That takes a few seconds and I then slew to a star. The star will generally only be a couple of minutes of arc away from where it should be (I take care to always take out any slack in the same way as I assemble the kit on the pier) and it is only the work of a few moments to "Sync" that error away. From the start of assembly to the start of the first sub can take less than 30 minutes although typically I perform the mechanical assembly earlier in the day if it isn’t already set up. I don’t get perfect tracking everywhere on the sky but at 1.9 arcseconds per pixel I can always get perfect stars at 200 second exposures and often get perfect stars at 1,000 second exposures!That accuracy isn’t down to the torque motors, although their silent performance is very seductive, but owes more to the high resolution encoders on each axis and I think that is something we’ll see more of in the future from all manufacturers. But however friendly the enveloping software and manuals are the performance is ultimately down to attention to detail of the end user in calibration. But "attention to detail" is the mantra of astrophotographers in any event… :)Hope that helps.Bob.