The photo shows two elements of what will be a fully robotic remote controlled spectrograph – based on a classical optical design.  This is being developed by myself and half a dozen American friends some of whom I’ll mention directly.

The large board houses the RW ‘book’ circuit modified by Clarke Yeager to allow remote working.  He designed the PCB which also houses a Nano BLE Sense for control of focusing, slit illumination, grating position, etc.  We envisage mount sensing, direction and environmental monitoring too.  The smaller box is a calibration injection unit, designed by Jerry Foote.  Software is being written by Tom Smith and the overiding architecture is by Wayne Green.  They’ll probably use a Pi/Odroid from overall command functions.  I’ll go with whatever they decide.  (A guy called Woody Sims keeps us in the real world!).  There are several others who bring unique skills to the team but I’ll spare the roll call but they’re all under the Society of Astronomical Sciences out of the US west run by Bob Buckheim.

It’s a neat team and we recently published an update paper.  More to follow as we make progress. 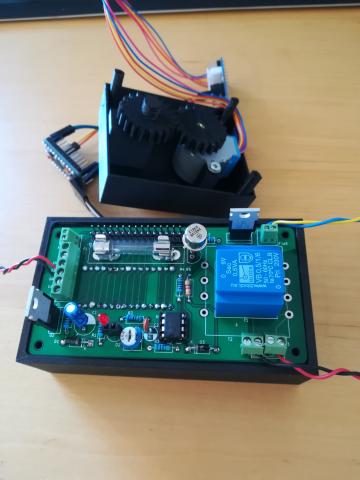