This image has a number of interesting aspects:-1) The track of Envisat across the sky as shown by the stars you mention is pretty-well parallel to that of Terra as shown on Heavens-Above. This confirms that the actual orbit of Envisat is polar, as for Terra, which is quite usual for an earth-observation satellite.2) The brighness profile of the flare is totally different from that of an Iridium flare or of the one I saw. This one seems rather more of a "flash" than a flare: Iridium flares tend to build up and die down fairly steadily over a period of about 30sec. The occasional one has a very bright central portion (when you’re close to the "centre line") but still has the steady build up and down. The Envisat "base level" is much less bright than for an Iridium flare.3) The Envisat image shows a number of subsidiary flares to the lower left of the main "flash". These are presumably caused by different parts of the satellite catching the sun before the main solar array, which doesn’t happen with Iridium flares.For comparison, here’s a couple of shots of Iridium flares. The first one has an unusually bright centre section (actually mag -8 or brighter!) and the second is a quite rare double flare – it’s a single exposure of 30secs, capturing two adjacent flares just 6 sec apart. 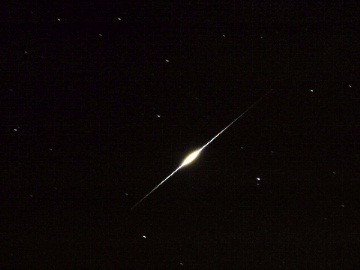 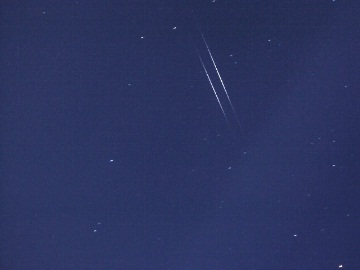 Bizarrely, while I was composing this reply I popped outside to see whether the sky was clearing and, purely by chance, saw a flare low down in the west! This was not listed as an Iridium flare by Heavens-Above but IGS 1A was passing that exact spot at the right time so I assume that’s what it was. The IGS family is known to flare, which raises the possibility that the "event" I saw on 11th June was caused by IGS 5A rather than Terra: it had almost exactly the same track but was close to Arcturus 1min earlier (which is within the tolerance of my "quick look at my watch in the dark" timings).Further comments invited.Steve Holmes