Some interesting observations.  If the almost vertical slotted lines are the satellites, then what are the thicker almost horizontal lines?  My system had been picking up slotted curved lines with a rough angle of 45-60 degrees relative to the horizontal, which are probably satellites. But meteors on the system show up a fleeting pings which are vertical, and the longer duration ones tend to be asymmetrical, sometimes have a E shape and sometimes a spiral extension. Occasionally I see lines which wander above and below the zero hertz frequency line (Y=0), and sometimes they are solid or dotted – I think these are certain beacon transmissions.  But I’ve not seen examples of what you are detecting showing almost horizontal lines with a slight slope, then repeats itself.

In the image I’ve uploaded, you can see the satellites are interfering with the software’s meteor recognition causing inflated count rates, which are difficult to manage by manual subtraction methods, which are time-consuming and not practical. 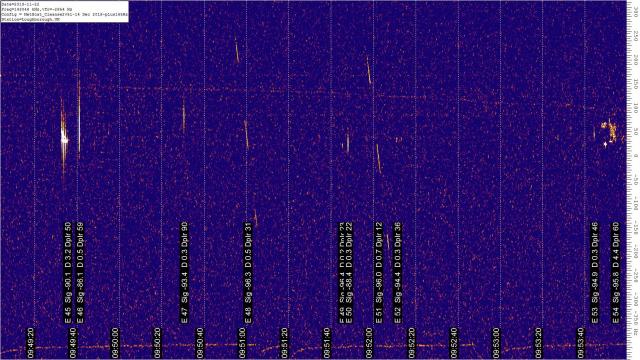