News of this nova reached me only a day after I had obtained my first stellar spectra with my new Alpy 600. As this object might show interesting developments as time went on, I thought I would obtain spectra on every observable night I obtained spectra on 14 nights (“evenings” more like) from 2018-05-02 to 2018-05-27.

I have been collecting data at a much greater rate than I could process it – as I was climbing up the processing curve as well as dealing with some acquisition issues, guiding especially. Thanks to Andy Wilson for his tutorial on BASS which I have used for this processing and also to Robin for tips and information.

But now I have processed spectra for three of the 14 dates (May-05, -13 and -27) and I am pleased with them. Here are the profiles, with Robin Leadbeater’s for comparison – and 1D fits files are attached too. 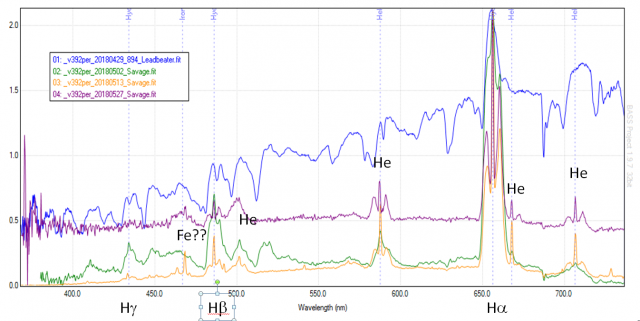 I am not sure I have the instrument response correction right, but I am pleased with the sharpness of the lines and to see that most of the lines are triplicated i.e with most of the prominent lines having two “side lobes”.  I hope I have identified the He lines correctly – I am suspicious about the Fe line (which BASS reports).

I have read practically nothing about the spectra of novae as yet, but I see these as being blue and red-shifted versions of the central line, which conjures up the image of an accretion disk with material on either side approaching us and receding. If this is the case and if I have my sums correctly, the velocities are some 1,000-2,000 km/s, with the approaching material tending to be slower. Can this be correct? Also, it seems to me that these have developed with time – the side lobes aren’t prominent in Robin’s very early spectrum, nor of mine, 3 days later (2018-05-02). By 2018-05-13 they are well developed (easily visible on the raw images too).

These are hot off the press, and I would welcome feedback on the results – e.g. should I be concerned about the instrument response correction?  I will be tackling the other 11 night’s spectra in the coming days. Eventually I will be subjecting the whole lot to a more detailed analysis and, before getting too far advanced, I’d appreciate hearing opinions about the accretion disk (novae are supposed to have them, I read)  hypothesis and whether radial velocities really can be as high as I suggest. In fact I’d be grateful for a pointer to a primer on the spectra of novae and any early papers/comments on this one.