This is the raw light curve. Purple shows the measure fluxes and their error bars.  Green lines connect the points.  A period of missing data and the existence of two (high measured flux)  outliers is readily apparent. 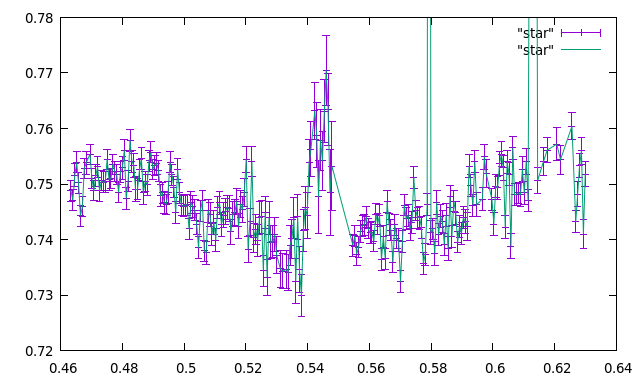 To me it appears that the ingress was picked up nicely.  At about mid-eclipse I found that the dome wasn’t tracking properly so the data there is either noisy or missing.  Towards the end of the eclipse the target had sank to an altitude of <35 degrees and further adjustment of the dome was neede (the slit exposes either the top 60 degrees or the bottom 60 degrees).  In addition, the high winds made the scope flap around so much that the autoguider couldn’t cope and several more images were lost.  The eye of faith suggests egress was detected but that may just be wishful thinking.

Detailed analysis will take place in due course.