A journey through the Universe 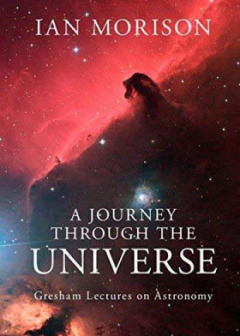 Most people will be aware of Ian Morison through his involvement as a radio astronomer at Jodrell Bank and with his major contribution to the Merlin telescope network. In 2007 he was appointed Professor of Astronomy at Gresham College, the oldest chair of astronomy in the world. During his period in this rôle one of his tasks was to deliver the Gresham Lectures, a series of astronomy outreach talks.

This book is a condensation if these lectures. It consists of 346 pages and 23 chapters. These are adaptations of transcripts from his lectures. In order to make the book flow nicely, chapters 3 and 10 were added.

I was privileged to attend some of Ian’s lectures at the Barbican in London. The book follows very closely those lectures that I attended. Anyone who has given talks will know that speakers use small repeated sound bytes in lectures. Some of these are evident in the text. They show up as short paragraphs, three to four lines long. They didn’t in any way distract from the text and I enjoyed looking out for them on the rare occasions when they became apparent.

The book is suitable for all levels of reader from beginner through to the more advanced. The chapters contain a mixture of both astronomy history and science fact. The first thing that hit me was how suitable the book was to either read from beginning to end or to dip into subject by subject. Each chapter stands on its own exactly as did Ian’s talks.

For lectures delivered starting in 2007 I suspected that some if the information might be becoming a little dated, but that is not the case. There is an amazing amount of science data here that wasn’t available at that time. Information from space missions that are described has been brought right up to date. An example is the latest Planck satellite results that are described in the later chapters. I have a bad habit of using a yellow marker to highlight information that is new to me. This book is highlighted throughout.

I enjoyed this book. I read it in order from start to finish but I will also keep it as an excellent reference book. Its structure and layout makes it makes it easy to find information even without using the index.

I recommend this book and will keep it prominently on my bookshelf.

Tom Boles is a former BAA President who maintains a significant private observatory in Suffolk, and has single-handedly discovered 155 extragalactic supernovae.