A photographic atlas of selected regions of the Milky Way 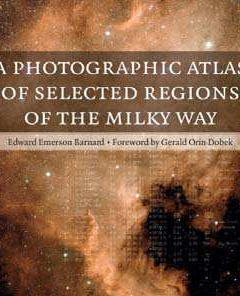 In the first decade of the twentieth century, the nature of our Milky Way galaxy became clearer. Numerous observers pioneered the study of our galaxy, but arguably none was more influential than Edward Emerson Barnard.

E. E. Barnard was a first class visual astronomer, with several comet discoveries, a galaxy in Sagittarius named after him (NGC 6822), discovery of the fifth moon of Jupiter (Amalthea), as well as his rapid proper motion star to his credit. But it is his marvellous series of photographs of the Milky Way that has placed him amongst the greats of observational astronomy.

Barnard worked from the age of nine in a photographic studio in his home town of Nashville, Tennessee so developed great knowledge of photography in the early days of that revolutionary technology, that he could later apply at Vanderbilt University, then Lick and finally Yerkes Observatories. The pioneering plates were taken with the bespoke Bruce Photographic Telescope, mainly from Yerkes but over some months in 1905 from Mount Wilson in California. The plates fundamentally changed our view of the interstellar medium in the Milky Way galaxy.

Barnard hand-picked his photographs of ‘Selected Regions’ and made drawings of the charts along with lists of objects on each plate with a view to publishing these, but his death in 1923 prevented him seeing the fruits of his hard labour. The Atlas was published posthumously in 1927 in two parts, ‘Photographs and Descriptions’ and ‘Charts and Tables’. The original volumes are collectors’ pieces now as only 700 copies were printed, but Cambridge University Press have produced them in a single volume, the hardback version in 2011 and now this paper-back edition.

Prof Gerald Dobek of Northwestern Michigan College has overseen this skilful merger and provided a brief foreword and addendum, and a short biography of Barnard himself. However the majority of the text is by Edwin Frost (Director of Yerkes Observatory, 1905−1932), and Barnard himself. The bulk of the volume comprises 50 plates with descriptions and charts.

Cambridge have done the Atlas justice. It is a fine work, and in many ways still relevant to modern astronomy, although our knowledge has progressed vastly in the 110 or so years since the photographs were taken. One can still marvel at the detail in Barnard’s photographs, and wonder at his patience, from which he concluded that dark silhouetted nebulae existed in conjunction with the brighter material that he was the first to capture.

The paperback version is very much the same size and has the same contents as the hardback. It is slightly lighter and less hard-wearing, of course. It would have been nice to have modern epoch coordinates for the objects on the charts (they are from 1875) but the J2000.0 coordinates are given in a separate catalogue of Barnard’s 349 dark nebulae.

This book is a must for anyone with an interest in dark nebulae, or in the history of E. E. Barnard. It will appeal to any student of the Milky Way and 20th century astronomy in general, and in this paperback volume, it is very affordable.

Dr Nick Hewitt is a keen Deep Sky imager and an enthusiast of dark nebulae. He is presently immersed in a project observing the Taurus Dark Cloud.