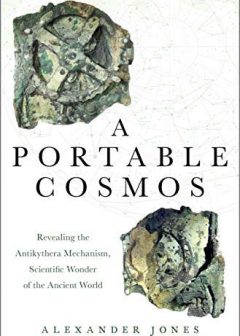 In April 1900, an ancient shipwreck was discovered off the Greek island of Antikythera (also known as Aigila). A series of archaeological dives took place over the next year, recovering antiquities such as statues. One particular piece of salvage attracted interest, displaying signs of gear mechanisms, dials and pointers. Ever since, the ‘Antikythera Mechanism’, as it has become known, has been the subject of increasingly sophisticated research, in an attempt to tease out its internal workings and to identify exactly what it was used for.

Alexander Jones, Professor of the History of Exact Sciences in Antiquity at New York University’s Institute for Study of the Ancient World, has been at the forefront of this research. In A portable cosmos: Revealing the Antikythera Mechanism, scientific wonder of the ancient world he presents a very readable account of the Mechanism, and the consensus of what it was used for. The Mechanism is thought to have been a predictor of solar, lunar and planetary motions through the zodiac, on the front of the mechanism; and a predictor of eclipses on the back, with separate dials for the Saros and Metonic cycles.

The book is well structured, each chapter methodically examining one aspect of the story. Chapter one summarises the history of the wreck and its contents; chapter two, the advances in analysing the Mechanism. Chapter three is a virtual tour of the Mechanism – Jones evokes the curator of the Mechanism demonstrating it to a passenger on board the ship. Succeeding chapters work their way through each of the dials which have been identified. Not only do we learn about the physical mechanism for each dial, Jones also explains A portable cosmos: Revealing the Antikythera Mechanism the historical context – what was known astronomically at the time, and why the dial’s predictions would have been significant to its owner. A final chapter goes inside the machine, to describe the gearing and explain the compromises required to support multiple dials. An afterword draws together the strands of the book, placing the Mechanism in the context of other geared mechanisms written about in antiquity.

I liked the measured tone of the book, which is in welcome contrast to the more excitable claims in the wilder reaches of the Internet. I was a little worried that the explanation
of the workings is presented as largely settled, when portions of the gearing and annotation are missing – but Jones does take time to outline alternative lines of thought. There remain fundamental questions. Who built the mechanism? For whom? When was it built and when was it lost at sea? (The Mechanism may already have been an antique when
it made its final voyage). These, of course, are questions which may never be answered. For now, we will have to settle for Jones’s excellent ‘User Manual’.

Mike Frost is Director of the BAA’s Historical Section