A shining furrow: the life of Charles T. Whitmell 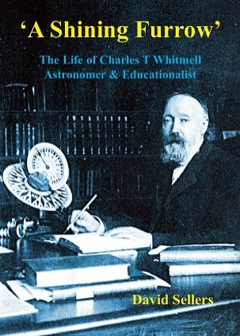 I acquired this book after reading Bill Barton’s notice on the BAA’s online forum (2021 Sep 2). ‘A Shining Furrow’ is the biography of Charles Whitmell (1849–1919) – a man of many interests, including astronomy. He was a member of the BAA in its early days and contributed a number of papers, as well as participating in a solar eclipse expedition.

What makes the book most remarkable and engrossing to read is the sheer amount of illustration. Whitmell was a conscientious recorder and kept prolific notebooks, no less than 217 of which were donated to Leeds University Library by his sister Charlotte. The book is printed on A4-size pages, with pictures displayed on most.

The story of Whitmell’s life is told in chapters which focus on particular topics. Thus Chapter 11, ‘The astronomer’, commences at the time he began recording his observations in notebooks, in 1893. In 1894 he was one of the founding members of the Astronomical Society of Wales, and in 1895 he paid his five-shilling subscription and joined the BAA. He quickly began to contribute papers to the Journal (mainly on the planets and their satellites), occasionally exhibiting the kind of humour we associate with Patrick Moore. His paper ‘A Martian sundial’ contained calculations on the equation of time on Mars, which he claimed were sent to him from the Director of the Fastigium Aryn Observatory on the red planet. His conclusion was that though we may not be sure that the Martians have built canals, we may be certain they have sundials.

In 1900, Whitmell led a BAA party to observe the solar eclipse of May 28 from Navalmoral in Spain. The expedition turned out to be both observationally and personally successful. On the train, on her way to the event, was a certain Lucy Foster. When Whitmell sent her draft copies of his eclipse report for the BAA, he sparked a romance which led to marriage two years later.

I found the book both interesting and informative, and I highly recommend it to both astronomers and readers with an interest in nineteenth-century issues. Whitmell believed passionately in social reform, being particularly committed to the causes of women’s suffrage and enlightened ideas in education, which he took every opportunity to spread in his career as an inspector of schools.

There is a useful appendix listing a number of Whitmell’s publications, including BAA Journal papers and articles. The index is helpful, though I have to say I judged it wanting when I discovered that a reference to ‘BAA’ is not to be found.

The book may be difficult to locate online or in shops but may be ordered from the Magavelda Press website (magavelda.co.uk/books/). I was most impressed with their speedy response and with the generous discount, which is offered to all members.

A member of the BAA since 1982, John Thorpe contributes observations to the Variable Star Section. He is a computer science teacher at St Hilda’s Anglican School for Girls in Perth, Western Australia, where he established the astronomical society which he has led for over thirty years