An astronomer’s tale: a life under the stars 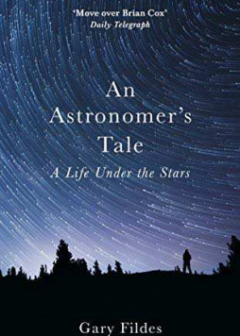 This book is two narratives within one.

It opens as the author describes, with anticipation, his journey out of the city to his favourite stargazing spot, the place he has put on the dark sky map – Kielder Forest in Northumberland and the dynamic observatory which he and his teammates have built. The sense of excitement and sheer joy that many amateur astronomers feel just to look up at the sky comes rushing out of the pages from the very start of the book.

Gary intersperses bi-monthly seasonal sky notes with his autobiography. He tells his story of growing up in Sunderland, how he first became interested in the skies and then how it became a great love in his life. His personal story is interesting and well told. His youthful clashes with the police in the heyday of football violence resonated with this reader having often been on the receiving end… His strength and skill as a bricklayer in the building trade developed his natural ability to lead and organise and made him into the success he is now, as a respected commentator and broadcaster on the skies, and as a driving force in the development of the Kielder Observatory − his ‘mothership’ − his ‘own personal stargate’: www.kielderobservatory.org. In recognition of his contribution to astronomy Fildes was given an honorary master’s degree in Science by Durham University.

Chapters on the Aurora, Eclipses, notes on equipment, and lists of constellations make this an excellent introduction to amateur observing, and also a good primer for star hopping through the seasons. The author describes how to find various objects simply, and includes beautifully produced full-page sketches of the best things to look for in each two-month period. A small criticism is that several times he mentions Messier objects to look out for, but these are not necessarily marked on the sketch – probably an editing oversight.

The more experienced observer will be interested in Gary’s story too, because he writes with an easy clear style, a story full of drama and passion, in the development of a world class outreach-focused observatory. We need more of those.

The hardback version has quality production values – clear print, 16 colour plates, and the above-mentioned sketches, topped off with a dust cover of the night sky above Kielder with glorious star trails.

After reading this book, you feel you just have to go to Kielder: it’s on my list of star parties to visit… if this southern softie can tough it out with those rugged northern observers!

Janice is a retired London police officer, whose life changed so much for the better after rediscovering the skies. She is a member of the Crayford Crew (Crayford Manor House AS, Dartford) and the BAA Council.