Are we being watched? : The search for life in the cosmos 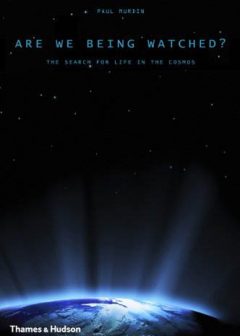 I don’t like the title, and the book addresses it only obliquely: what it does discuss is the existence of life on Earth and the possibility of life, and then intelligent life, elsewhere: Astrobiology.

Paul Murdin is well known in astronomy – a guest on Radio 4’s ‘In Our Time’, author of several books and many academic papers, and a former Treasurer of the Royal Astronomical Society. He has a genial, rather avuncular style, which is both convincing and reassuring, yet he faces issues squarely. He concludes (a little sadly?) that the human race may be unique, although he had not thought that when he began to write this book: ‘My head tells me one thing… My heart suggests another.’

Murdin is very much in the ‘Astro’ part of ‘Astrobiology’, but he has done his biology homework thoroughly. He makes the reader aware that the physical situation, composition and history of any planet must affect the chances of life existing there. He is also scrupulous in adding the biological caveats and encouragements that must be built into any judgement from a distance. Life on Earth, as he points out, is continually surprising us with its variability, durability and adaptability.

I wish the captions to the illustrations had been placed with them, not at the end of the section.

Murdin’s scrupulous method can slow the pace at times, but he reviews a lot − everything from how planets form to how one might choose to send an interstellar message. I was particularly struck by his section on the Drake Equation, which cannot yet be precisely solved. I found my attention was gripped, not by sensational claims, but good quotes and reasoned arguments. US astronaut Loren Acton, cited on p.51, said ‘Looking outward… I saw majesty, but no welcome. Below was a welcoming home.’ Salutary!

The famous KT boundary and the evidence of the Chicxulub impact is admirably presented, but so is the point that geologist Gerta Keller, for one, does not accept that it was the impact that finished off the dinosaurs. Later, with a chilling lack of emphasis, Murdin explains (in parenthesis) that human-crewed expeditions to Mars may have to ‘be planned as one-way missions.’

I enjoyed the book: any general reader who wants a good guide to astrobiology would do very well to read it, but the issue of the title nagged me.

An amateur astronomer since 1957, Roger worked in a bank for 26 years then went to university and got a degree in astronomy. He is now a tutor (in astronomy and planetary science) for the Open University and lectures in astronomy for other institutions.