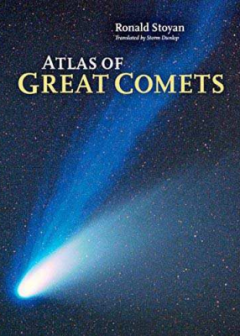 Surely no other objects in the night sky can generate as much interest as a Great Comet? The phrase goes back centuries, to a time when ‘Great’ was a word used sparingly, to depict something truly huge and unforgettable in the firmament: an easy naked eye object, with a long tail, that inspired wonder and even fear amongst the population. This large and lavishly illustrated atlas depicts 30 such cometary spectacles from 1471 to 2007, and no expense has been spared on the artwork. The author, Ronald Stoyan, was the co-founder of the German astronomy magazine Interstellarum and has written six other books via his Oculum astronomy publishing house. The original German language version of this atlas was released by Oculum in 2013. This English version (translated by Storm Dunlop) has recently been published by CUP.

Of course, many Great Comets were seen prior to 1471, not least Comet Halley, and so a few pages summarise the Great Comets seen in antiquity and during the Middle Ages. However, the main bulk of this book, almost 170 pages, covers those 30 cometary spectacles, specifically: one in the 1400s; three in the 1500s; five in the 1600s; three in the 1700s; six in the 1800s; eleven in the 1900s; and finally, C/2006 P1 (McNaught) in 2007. Comet Halley’s returns account for seven apparitions, so 24 different comets are involved. While some might argue that Kohoutek, Halley in 1986 and Shoemaker−Levy 9 do not deserve inclusion in Stoyan’s list, they certainly generated much publicity!

The potential reader might wonder whether the pre-‘routine photography’ era comets, those witnessed prior to the Great September Comet of 1882, can really be described alongside lavish illustrations, but they have been here! Fortunately, numerous paintings and woodcuts of ancient Great Comets survive and the author has gone to impressive lengths to unearth them all. This atlas is not just a glossy coffee table book, as plenty of easily digestible data are provided and the first 40 pages describe comets in terms of ancient beliefs, literature and science. The tale about Barnard’s mythical automated comet search engine (p. 32) is a gem. I own many comet books, but simply for the pleasure of casually browsing the illustrations in this atlas, I would have to say that it has instantly become my favourite. It will surely appeal to all who are fascinated by the awesome ‘Broom Stars’ of yore.

Martin is a former BAA President, a frequent CCD imager and the author of 13 astronomy books, one of which explains how to hunt and image comets.