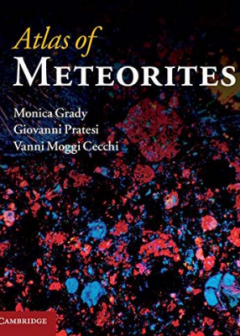 Accurately cut and polished thin sections of rocks viewed through the microscope under polarised light show a kaleidoscopic range of colours, which to the trained eye reveal the mineralogical make-up of the rock. The meat of this Atlas comprises illustrations of such standard sections, with associated text, running through the petrological sequence of meteorites using ‘type’ specimens. Many of the illustrations are beautiful in their own right, and provide a good example of science as art. Geology does however have a complex vocabulary, and this means that overall the Atlas is not for the beginner, but for a technical audience with some knowledge of university level geology and petrology.

The Atlas begins with a general introduction to meteorites and their classification, and each broad meteorite grouping is also prefaced by an introductory chapter. All these chapters are well referenced, though there is no glossary. A CD with images usually comes with the Atlas and the images can also be downloaded, a facility which would be useful when preparing lectures.

The authors are a European team, with Monica Grady, who has given talks at BAA meetings, having links to both the Natural History Museum where she was Curator of Meteorites, and the Open University where she is a Professor of Planetary & Space Science. The other two authors are research scientists from Italy, specialising in meteorites. Cambridge University Press has done an excellent job on the presentation of the Atlas and the text and illustrations are clear.

The Atlas won two PROSE awards in 2015, which demonstrates the high production quality. At £95 it is less expensive than some other CUP books for the academic audience, though in the upper range of its planetary science portfolio. Somewhat to my astonishment the most expensive are some volumes of Cometography which run to over £200. Such a pricing scheme will not encourage those with just a passing interest in a subject to purchase CUP books.

Jonathan is Director of the Comet Section. He wrote a dissertation on dating meteorites when at university and made a field identification of the Glatton meteorite that fell near Peterborough in 1991. [See JBAA 101(4), 204 (1991)]