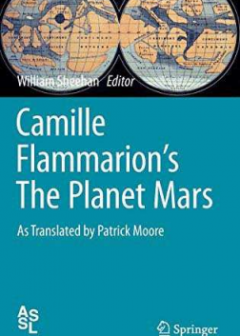 In 1892 that great French populariser of astronomy, Camille Flammarion, published a complete summary of the current knowledge of the planet Mars. His encyclopaedic book, citing all the published material on each opposition from the invention of the telescope till 1890, and lavishly illustrated, quickly became a classic. Never previously translated into English, and available only occasionally within the antique book market, the work is now available again in an edition prepared for publication by Bill Sheehan at the request of the translator, the late Sir Patrick Moore.

For various reasons the translation has had to wait a quarter of a century to get into print, but it is a worthy successor to Sir Patrick’s earlier editions of Mars books by G. de Vaucouleurs (1950) and E.−M. Antoniadi. Flammarion published a second volume in 1909 which is, as Sheehan writes, only of value to the real Mars expert. Thus the translation of Volume 2 remains in typescript only, with library copies at the RAS and at Flagstaff. But Volume 1, now before us, handily brings together all the classic works on the planet under one cover. All these books and reprints Flammarion possessed in the celebrated library that he built up at his observatory at Juvisy outside Paris.

Flammarion favoured the idea of life being widespread throughout the Solar System, and the affair of the martian canals was very exciting for him in strongly suggesting the existence of life of some sort upon the surface of the Red Planet. He was in constant correspondence with Giovanni Schiaparelli and Percival Lowell. In the Bullétin of the French Astronomical Society (an organisation founded by Flammarion), Mars always featured more than any other planet.

The book concludes by reviewing the evidence for change on the planet’s surface. Such variations were widely interpreted as being due to vegetation: the true explanation of underlying albedo features exposed or hidden by windblown dust would have to wait until the Space Age.

Despite the necessarily high price, I am sure that this English translation will have widespread appeal, and it will serve to introduce the delightful writings of Flammarion to a new audience. I congratulate both editor and publisher upon the fine appearance of the illustrations and text, and I wish it every success.

Richard McKim directs the BAA Mars Section, collects Flammarion’s books, and greatly admires that past populariser of our favourite hobby.